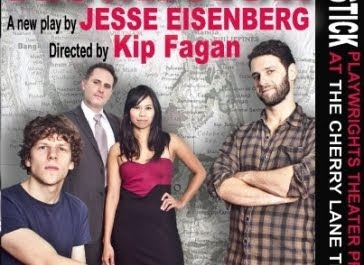 I think Jesse Eisenberg intended his play Asuncion to be about the clash of cultures: what happens when two white liberal college students share their apartment with a young woman from the Philippines.

But it struck me as more of a collision of quirky characters than insightful social satire. Asuncion seemed like a younger Odd Couple with Eisenberg and Justin Bartha portraying mismatched roommates and Camille Mana as the woman who comes into their lives, a la the Pigeon sisters.

The play takes place in Binghamton, N.Y., where Bartha's Vinny is a graduate student in black studies and Eisenberg's Edgar runs a website denouncing American imperialism. Mana is Asuncion, the new wife of Edgar's older brother, played by Remy Auberjonois. For some mysterious reason, Asuncion has to hide out with Vinny and Edgar for a few days.

Mana is very sweet and endearing as Asuncion. It was interesting to see the impact she has on Vinny and Edgar and their interaction was fun to watch. Bartha's smooth and laid-back Vinny was great. But Eisenberg's Edgar felt way too frenetic. I think his character was supposed to be neurotic and socially awkward but this was too often over the top.

Still, Eisenberg can be a witty and thought-provoking writer, especially in the way he deflates Edgar's overblown cultural perceptions and brings out Vinny's latent bigotry. There's a great scene in which Asuncion compares America to a pop song. And Edgar's description of booking a plane flight to a far-flung location is hilarious.

But overall, Asuncion felt kind of slight. The satire wasn't sharp enough and the humor got weary. Not a lot really happens. It's hard to believe Edgar's brother would leave his wife in a messy, dumpy apartment for any amount of time - or that she'd agree to stay. And when we finally learn the reason, it didn't seem all that necessary.

I also couldn't figure out the relationship between Edgar and Vinny. There's one scene where, in a drug-induced haze, Vinny taunts Edgar in a way that seemed cruel. Edgar doesn't pay rent, so does Vinny let him stay in his apartment just to mock him? Or maybe it was a short-term deal and he can't get him to leave? In any event, they don't seem like friends.

(One thing about Asuncion that I absolutely loved was John McDermott's set design. From the Afro-centric posters on the walls to the dirty dishes overflowing in the sink, it was exactly the kind of place you'd expect a struggling grad student like Vinny to have.)

I've enjoyed Eisenberg's movie roles, especially his Oscar-nominated take on Facebook founder Mark Zuckerberg in The Social Network. I hope he continues writing plays and acting onstage. (Although I'd like to see him in someone else's play next time.) I was also impressed by how down to earth he seemed at the stage door, taking a lot of time to pose for pictures and sign autographs. At 28, he's incredibly youthful looking, too.

And Asuncion is attracting younger audiences who seemed to be having a good time. At the performance I attended, one woman sat down in the front row and propped her skateboard up against the wall of the Cherry Lane Theatre. You'll probably never see that on Broadway!
Posted by Esther at 5:15 PM