Sons of the Prophet

Sons of the Prophet, at the Roundabout Theatre Company,
Laura Pels Theatre
Gratuitous Violins rating: ***1/2 out of ****

Sometimes a play connects with me for the way it depicts a slice of life. Sure, the plot might be heightened for dramatic purposes but there's still a recognizable human scale to the story. Sons of the Prophet is one of those examples.

In Stephen Karam's play, a Lebanese-American family in eastern Pennsylvania is coping with a tragedy. Brothers Joseph and Charles Douaihy, played by Santino Fontana and Chris Perfetti, have lost their father, who died of a heart attack after a car accident. He swerved to avoid a deer - actually a decoy left in the road as a prank by a star high school football player.

Because of the circumstances surrounding their father's death, the family has become a source of media attention. The play builds up to a school committee meeting where it'll be decided whether the athlete, Vin, played by Jonathan Louis Dent, can finish out the season before being sent to a juvenile detention center. 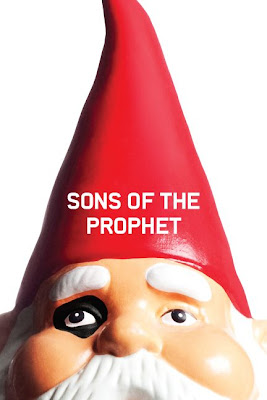 The brothers also have their hands full with their cantankerous, politically incorrect uncle Bill, played to the hilt by Yusef Bulos. Joseph's wealthy and quirky boss Gloria, played by Joanna Gleason, is badgering him about her idea for a book based on the Douaihys' distant relation to the poet Khalil Gibran. Gleason is hilarious as Gloria barges in on the family uninvited, gradually becoming more demanding and unhinged.

And on top of all that, both have physical limitations. Charles was born with only one ear. Joseph, once a competitive runner, is suffering from a debilitating pain in his limbs that has baffled doctors.

This is the fourth time I've seen Fontana and I always enjoy his performances. He expresses Joseph's physical and emotional suffering in a way that's mostly quiet and understated. This is a strong person. He also makes the wry, self-deprecating humor in Karam's dialogue seem so natural. Relating the family's run of bad luck he quips: "We're like the Kennedys without the sex appeal."

Charles is the opposite of his older brother - he's much more extroverted and social, a likeable, curious teenager with a keen interest in geography. Perfetti is a very physically expressive actor and I couldn't take my eyes off him. His body language - just the way he stretched his legs as he leaned against a table, for example - was riveting.

Both brothers are gay but where Charles seems confident in his sexual orientation, Joseph is more timid. Karam draws him out of his shell by giving him a love interest in the form of a reporter, Timothy, played by Charles Socarides. Karam also uses Timothy to make a point about the way the media jumps on a story.

It was also interesting to see Sons of the Prophet amid the allegations of child molestation involving former Penn State football coach Jerry Sandusky. The play reminded me of the lofty position that high school and college sports occupy in some communities - to the point where winning is the only thing that matters and athletes are afforded special treatment.

But what I liked most was the way Karam illuminates the struggles of everyday life: Joseph's need to stay working for Gloria because she provides him with health insurance, his fear that something ominous is causing his aches and pains, the brothers' care for their increasingly frail uncle. Fontana, Perfetti and Bulos make the Douaihys seem like a real family. And director Peter DuBois draws great performances from everyone.

Sons of the Prophet is an absorbing look at how we get through everything that's thrown at us in our lives - with humor, grace and resilience.
Posted by Esther at 11:15 PM

I'm so glad you liked it. I was in love with it at the Huntington. I can't wait to finally see it again this weekend at Roundabout.

Thanks for reading! This wasn't even on my radar until people on Twitter started buzzing about it. I think the Penn State situation gave it even more timeliness. It did make me think about the way we protect atheletes and sports programs. But I really loved how it showed a family in a time of stress. I'll be looking forward to hearing what you think when you see it again!