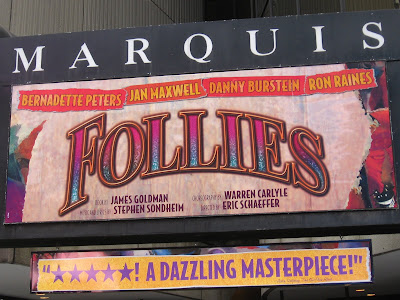 Follies, at Broadway's Marquis Theatre
Gratuitous Violins rating: **** out of ****

Because my opportunities to get to New York City are limited, I almost skipped the Broadway revival of Follies. I'd seen a fine version at Boston's Lyric Stage in 2008 and I rarely revisit a show. I figure been there, done that.

And while I like Follies, it's not my favorite Stephen Sondheim musical. It tells the story of former showgirls who return for a reunion in their old theatre just before it's demolished. While some are happy, others express regrets at how their lives have turned out compared with the dreams they harbored in their youth. That's a subject which hits a little too close to home.

But I'm so glad I gave it another chance. This is a production that speaks honestly - with humor and pain and poignancy - about what happens as we grow older.

While Follies is my fourth Sondheim musical, it's the first one I've seen with a full orchestra. And it really does make a difference. I mean, 28 musicians, that's almost a symphony. (Including 2 chellos. I didn't even know the plural of cello was celli!) They sounded so lush and gorgeous.

The Marquis Theatre is one of Broadway's newest houses but the designers - Derek McLane's set, Gregg Barnes' costumes and Natasha Katz's lighting - combine to give the appearance that Follies is taking place in a crumbling, eerie space. It was moody and ghostly and perfect.

Along with the theatre, these women are also in transition - their marriages are troubled, their children have grown up and left home. They're not as sprightly as they used to be. They're shadowed by younger actors, reminders of their former selves.

One of the things I love about Follies is watching the showgirls perform their routines from 30 years earlier. What endearing women with interesting stories, ones that they don't often get a chance to tell onstage, in movies or on TV. Some of the poignancy comes from knowing their real-life background: opera singer Rosalind Elias making her Broadway debut at 82!

It was so moving to see them parade onstage, just like the old days, in "Beautiful Girls." I loved Terri White's Stella Deems leading the troupe in "Who's that Woman?", Jayne Houdyshell's Hattie Walker belting "Broadway Baby" and Florence Lacey's film star Carlotta Campion proclaiming "I'm Still Here," with all of the witty historic and cultural references.

This was my first time seeing Maxwell in a musical and she is the absolute definition of a triple threat. Watching her sing and dance through "The Story of Lucy and Jessie" was exhilarating. It was only about a week after she was hit by a car crossing a street in Times Square. She's simply remarkable.

I'd only seen Peters on TV and in the movies, so seeing her onstage was thrilling. As a deeply unhappy and mentally unbalanced woman, who feels her life is falling apart, she was heartbreaking. I was riveted by her rendition of "Losing My Mind."

What I've really come to appreciate about Follies is that it's a musical for anyone who loves thoughtful and original work. The themes are timeless and it's the kind of show that reveals new layers every time you see it. This was my final show of 2011 and what a great way to cap a year of theatergoing.
Posted by Esther at 12:30 PM

Great review and agree with all of it...except you think Jan Maxwell is a triple threat? Acting and mostly singing yes, but not dancing. She's not a natural dancer and it shows.

Thanks Sarah! I just remember being dazzled by the "Lucy and Jessie" number. But I have 2 left feet so maybe I'm just impressed with anyone who can move around onstage. ;-) Anyway, I'm so glad I had a chance to see Follies on Broadway.

Oh, I can't dance either, but when you've seen a dancer do the role, it's obvious - not that Jan is horrible by any means. I'm just glad you saw Follies - I was quite appalled that it wasn't on your must see list at first. What is your favorite Sondheim, anyway? Which have you seen? (And I think you can stop playing the limited visits to NYC card - you get to come here pretty often compared to most people, especially since you're a relatively short train ride away and don't have to board a plane. I'm sure we'll see you lots in 2012.)

No mention of Elaine Paige? She's the reason I wanted to see the show! :)

Hey Anonymous! I should have mentioned that Elaine Paige was out the week I saw Follies. I think she had some previous concert commitments.