Even though it closed earlier this month, I just want to say a few things about the Broadway revival of Harvey starring Jim Parsons, of the TV series The Big Bang Theory.

I'd never seen Harvey, not even the movie with Jimmy Stewart. But I knew it was about a man and his imaginary friend, a 6-foot, 3/12-inch pooka that looks like a giant rabbit. I knew that the play, written by Mary Chase, had been awarded the 1945 Pulitzer Prize for Drama. 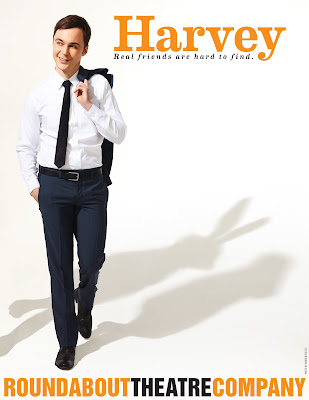 Unfortunately, Harvey felt dated and left me wondering what the Pulitzer committee was thinking. It was amusing but it also struck me as  kind of slight and left me feeling slightly uncomfortable.

As Elwood P. Dowd, Parsons was sweet and likeable. He also got huge entrance applause. I've never seen his TV series but apparently it's made Parsons very popular. I liked him in his Broadway debut last summer in The Normal Heart.

In Harvey, I wasn't quite sure what to make of Parsons' character and what his invisible friend signified. Was Elwood supposed to be mentally ill or an alcoholic or both? He's always talking about going to a tavern for a drink yet he never acts intoxicated.

I guess he's is the kind of character who, if he were poor, would be crazy but because he comes from money and a good family, he's merely eccentric. Except for his invisible companion, he seems pretty ordinary and doesn't appear to have any trouble functioning. He's a kind, good-hearted soul. A little strange but harmless.

Elwood's social-climbing sister and niece, played by Jessica Hecht and Tracee Chimo, consider Elwood's behavior to be an embarrassment. They're hilarious as they scheme to get him committed to a mental institution, which doesn't go quite as easily as they had hoped. (I really enjoyed seeing Mad Men's Rich Sommer as a hospital orderly.)

But this is where Harvey begins to show its age and gets kind of uncomfortable.

The head of the institution, the distinguished Dr. William R. Chumley, played by Charles Kimbrough, wants to give Elwood a shot that will stop him from seeing Harvey. It may also change his personality, and not necessarily for the better.

To my 21st century mind, that raised ethical questions about potential side effects and informed consent. Also, I don't like drama that romanticizes mental illness - if that's what Elwood has. Harvey became less of a quirky period piece and more troubling.

It's still possible to enjoy Harvey, as long as you don't think too much about the plot and its implications.
Posted by Esther at 9:00 PM

It's been ages since I've seen a production of Harvey, but I think because of my age I didn't think of how dated the show seems because of the issue with the shot, as well as how class ties into how Harvey's hallucinations are perceived.

And although I found it enjoyable years ago, I still think it's screwed up that this won the Pulitzer instead of a Tennessee Williams play.

After I saw it I was talking to a friend who said that you have to remember it was 1945, the end of World War II, and people were looking for a light comedy to take their minds off things. I mean now, because of the issues of mental illness and alcoholism, we don't think of it as light but back then, it was different I guess.

Esther, all I can say is see the movie and you'll understand it better.

Thanks, anonymous! I do want to see the movie. I'll put it in my Netflix queue.