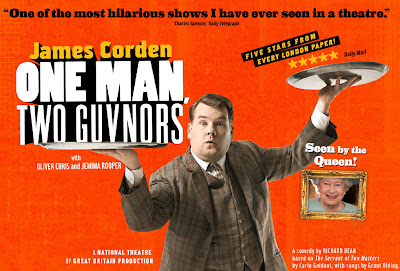 I've been to a few shows where everyone around me has been howling and I'm sitting there only mildly amused. This is especially true of slapstick, which in my opinion sometimes goes on for far too long. How much can you take of people falling down and getting hit with things?

Well, One Man, Two Guvnors has lots of physical gags and it had me laughing until the tears were rolling down my cheeks. All of my normal defense-against-humor mechanisms were rendered useless before the sight of someone eating an envelope and getting hit in the head with the lid of a trash can.

Tony winner James Corden, a teddy bear of a man, is a big part of what makes the play so irresistible. Stuffed into a three-piece suit that's a little too small and perpetually hungry, he's hapless and yet so sympathetic. He has a great command of the stage, at times addressing the audience directly to ask for help - or a sandwich.

Corden plays the down-on-his-luck Francis Henshall, who winds up working for two employers at once in seaside Brighton, England, in the 1960s. His "guvnors" are the posh Stanley Stubbers (Oliver Chris) and the tough Rachel Crabbe (Jemima Rooper), in disguise as her gangster brother Roscoe. He spends a lot of time trying to keep each one from finding out that he's working for the other.

If it were just pratfalls, that wouldn't be enough. I think the play, adapted by Richard Bean from the 17th-century Italian farce Servant of Two Masters, worked because of its quirky, off-the-wall characters, like Daniel Rigby's Alan, an incredibly hammy actor. A caricature to be sure, but in a good way.

And while the plot is convoluted - there's lots of mistaken identity - it was enough to hold my interest. I thought Nicholas Hytner's direction kept things moving along briskly, even in Act II, which isn't quite as frenetic.

One Man, Two Guvnors reaches its comic height in the first act. Henshall's employers are dining in the same pub and he's desperate to keep them apart. At the same time, Tom Edden's Alfie, an extremely elderly and accident-prone waiter, keeps bringing more food. Edden is brilliant and with the help of physical comedy director Cal McCrystal, the scene looked effortless. It was hilarious.

I have to mention The Craze, a skiffle band whose four members played 1960s-type pop tunes before the show, at intermission and during scene changes. The music, written by Grant Olding, was catchy and really got me in the mood for something fun.

Sadly One Man, Two Guvnors, which just recouped its investment, is closing Sept. 2. It's too bad the play, a production of Britain's National Theatre, couldn't have extended even if Corden had other commitments.

Sure, it's light and silly, but it's a smart kind of silly. How many comedies can say that?
Posted by Esther at 12:40 PM

I'm sad I missed this one. I feel the same way about slapstick but think I would have been right there with you, tears streaming down cheeks!