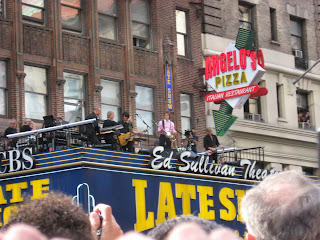 For once, I was in the right place at the right time.

A friend from Providence came with me for the first two days of my New York City vacation. Yesterday we went to Greenwich Village and in the evening we saw Blithe Spirit on Broadway with the delightful Angela Lansbury.

Today was pretty full, too - starting with a walk up Fifth Avenue to Central Park, followed by visits to the Metropolitan Museum of Art and the Museum of American Folk Art. They were both great, especially the Folk Art Museum, which I'd never visited before.

Around 4:45 we were walking back to the hotel. Now, we had two choices - we could have walked along Sixth Avenue (aka Avenue of the Americas) or up to Broadway to go through Times Square. My very wise friend decided she wanted one last walk though Times Square before catching her train home.

And that turned out to be a fateful decision.

As we made our way up 53rd Street toward Broadway I noticed an unusual number of police officers. Broadway was blocked off with metal barriers and hundreds of people were standing behind them.

I asked someone what was going on and she told me that Paul McCartney was a guest on The Late Show with David Letterman and would be performing on top of the marquee of the Ed Sullivan Theater. I looked up and sure enough - it was set up for a concert!

To say that I was stunned would be an understatement. Paul has always been my favorite Beatle. I've always wanted to see him in concert but never had the chance. And now, I'd get to hear him live! I couldn't believe it.

Now, I've been in the audience for a Late Show taping and I know they do it in real time, starting at about 4:30 p.m. So the whole thing takes about an hour. I wasn't sure when Paul would be playing. Someone said 5, someone else said 5:15. It turned out to be near the end of the show.

In the meantime, people were leaning out of the upper stories of nearby buildings next to the theater to get a good view. Cameras were set up on raised platforms across the street. Someone in a Beatles T-shirt was trying to sell what looked like a huge mimeographed drawing of Paul. Everyone was very patient - not much pushing or shoving.

Finally, a huge roar went up when Paul climed out onto the marquee roof. I think he had a pink shirt on but I was kind of far back, so it was hard to tell. And he was so cute and charming and funny, just like I imagined he'd be.

He asked how we all were, said this was for "the telly" so he couldn't start until they were ready. He jokingly asked the people in the office building across the street why they weren't at work.

And wow, the man can rock! He sang "Get Back," followed by a song I didn't know, and "Coming Up." Then he continued to sing after the show ended - another song I didn't recognize, followed by "Band on the Run."

All I could think of was the Beatles and their rooftop concert. Paul sounded great. I can't believe I finally got to see him. It was an amazing experience. You can watch the concert here.

After a day like today, is it any wonder I love New York?!
Posted by Esther at 11:14 PM

The one night I don't watch Letterman.. Jeez..

Way to go, Esther! Sounds like you're having a blast.

Lucky girl! What gift to stumble upon. My father called me yesterday morning to ask if I'd seen this; I told him you were my stand-in.

Fantastic! Now this is the way to have a NYC adventure. I hope you'll post pictures!

Thanks for the comments, everyone! I still get chills thinking about it - how I've always wanted to see Paul in concert and then suddenly, there he was! In my wildest dreams I never thought something like this would happen. I had such an unbelievably wonderful vacation and Sir Paul was a big part of it.