It's Ragtime again on Broadway 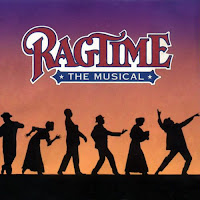 Eighteen months ago I wrote a blog post titled "The best musicals I've never seen,'' about scores I love listening to even though I've never seen the shows that they're from.

Well, this fall I'll be able to cross one of those off my list because Ragtime is coming back to Broadway and I'm pretty darn excited! It's kind of like an early Fourth of July present.

The revival begins previews Oct. 23 at the Neil Simon Theatre and opens Nov. 15. (Here's Vance's review of the production at the Kennedy Center for the Performing Arts, although there will be cast changes.)

I've seen the 1981 movie but until I started to become a regular theatergoer I didn't even know there was a musical version of Ragtime. I've since listened to the Tony-winning score by Lynn Ahrens and Stephen Flaherty and I love the way they've translated Doctorow's story into song.

The original Broadway production of Ragtime opened on Jan. 18, 1998 and closed two years later. In the cast was an adorable little Lea Michele - before she grew up to be in Spring Awakening.
Posted by Esther at 11:48 PM