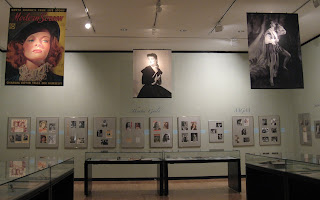 Last week, my passion for the theatre and my interest in the history of the 1960s intersected in a most unexpected way.

It happened when I went to see the Katharine Hepburn exhibit at the New York Public Library for the Performing Arts, at Lincoln Center. It runs through Oct. 10 and I definitely recommend a visit.

The exhibit, drawn from Hepburn's private papers, documents her stage career from the 1920s to the 1990s, including her Broadway appearances. I got a kick out of seeing her name in college productions from her years at Bryn Mawr, her first Equity contract.

But near the end, I saw something that surprised me: an unusual request made of every Broadway cast on one night in May 1970.

Regular readers of my blog know that I've always had a keen interest in the 1960s - in the culture, the music, the history of the civil rights and antiwar movements.

One thing I didn't know was that audiences on Broadway were asked to observe a moment of silence following the killing of four students at Kent State University by Ohio National Guardsmen on May 4, 1970.

On May 7, 1970, Ms. Hepburn was appearing on Broadway in the musical Coco, based on the life of French fashion designer Coco Chanel. She received the following telegram at the Mark Hellinger Theatre from Keir Dullea, on behalf of Actors Equity:

"Would the cast join us in asking the audience for a moment of silence on Friday May 8 after the curtain to remember the four Kent State students and to ask that such a tragedy shall never be repeated."

This was such a polarizing time in American life. I'd be interested in finding out whether all Broadway casts complied or whether there was some resistance. I know Broadway marquees are often dimmed when a stage notable passes away but this was something different. 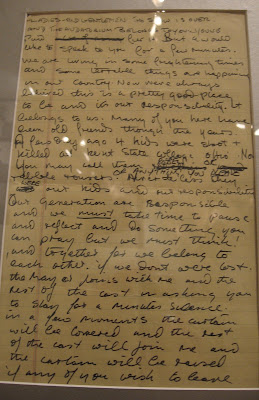 Hepburn decided not only to ask for a moment of silence but composed a short speech, which you can see as part of the exhibit.

Her niece, the actress Katharine Houghton, told The New York Times that the remarks were a surprise. Hepburn usually was “very careful not to mix politics with the theater,” and often quoted Spencer Tracy's comment that “actors who got involved in politics can suffer the fate of the man who shot Lincoln.”

But the shootings were so horrifying that she apparently felt an obligation to speak out. And what Hepburn wrote was so moving. I love that she talked about how these were "our kids" and "we belong to each other." Here's an excerpt:

"Now you may call them rebels or rabble-rousers or anything you please. Nevertheless, they were our kids and our responsibility. Our generation are responsible and we must take time to pause and reflect and do something. You can pray but we must think! And together, for we belong to each other. If we don't, we're lost."
Posted by Esther at 10:00 AM

Wow, Esther. So glad you were as moved by this particular piece as I was. It really struck a powerful chord with me and is what I remember best from this tremendous exhibit. Thanks for sharing.

You're welcome. I felt exactly the way you did when I saw it. That speech definitely struck a chord.

I just thought it was so fascinating that the request for a moment of silence was made. It brings home the point that what happened at Kent State was so horrifying that even people who weren't normally inclined to speak out felt compelled to do so.

I can't even imagine how powerful it must have been to be there and hear Katharine Hepburn say those words. Such a moving, forceful statement. And she keyed in on what was important - we're all in this together.

It was a very sad moment in our history and no matter what your politics were, you had to be moved. I would love to see this exhibit having always been a huge fan of KH. Lucky you!

Hey Sandy, thanks for the comment. Yeah, I think you're right about Kent State being such a sad moment that no matter how you felt about the war, it touched you.

The NYPL exhibits aren't huge but they regularly have theater-related ones that are always nicely done.

Esther,
Thank you so much for sharing your experiences about this exhibit. I am a faculty member at Kent State and was a student at Kent State in 1970. This was particularly meaningful to me because I am working with a group of scholars to collect exhibit materials for our May 4, 1970 Visitors Center permanent exhibit on the campus. I was just in NYC this past summer and am saddened to think I was so close to seeing this. I hope I can get there before the exhibit closes.
Best regards,
Carole
PS If anyone is interested in the Visitors Center at Kent our website is http://www.kent.edu/may4

Carole, thank-you so much for the comment. I'm embarrassed that I forgot to reply. And I'm glad that my post helps your effort. It's so important to remember what happened on that tragic day and the aftermath.

Since you are interested in KH and KSU, the Kent State University Museum is doing an exhibition on KH opening this Oct as the key exhibit of its 25th anniversary. "Katharine Hepburn: Dressed for Stage and Screen" displays KH's personal collection of performance clothes that span her career. They were gifted to the museum by her estate in 2008. For more info go to www.http://kent.edu/museum or become a friend of the museum on Facebook.

Thanks, Yours Truly. How wonderful that Ms. Hepburn left those items to the university. I will definitely check out the web site.