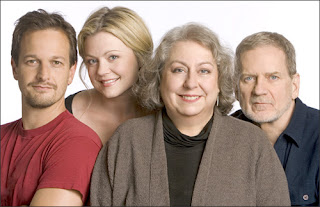 I don't know whether Jayne Houdyshell ever worked as a receptionist in an office, but she certainly is terrific portraying one in Adam Bock's short one-act play "The Receptionist" at the Manhattan Theatre Club.

Houdyshell's portrait of Beverly Wilkins still makes me smile whenever I think about it. Almost everyone has worked in an office or been in an office with people like Wilkins. She's efficient, overprotective of office supplies, motherly, humorous and has plenty of advice to dispense, whether you want it or not.

I can just picture her sitting at her circular desk answering the phone at the Northeast office of some unnamed concern, transferring callers to voice mail, wiping down her workspace with disinfectant and keeping track of wayward pens. David Korins' excellent production design gives Houdyshell plenty of props to work with.

At first, Bock's play appears to be a celebration of the mundane. It didn't surprise me that he told Playbill he once worked as an office receptionist. He has a good ear and a good eye for what the work is like: "The thing that was so interesting is you have a lot of power, because you know everything that's going on, yet you have no power, because you're not allowed to leave your desk."

Houdyshell's Wilkins advises her young coworker Lorraine, played by a delightfully flirtatious Kendra Kassebaum, on her love life. She orders a birthday cake. She makes personal phone calls. She offers a parenting tip to Mr. Dart, played by Josh Charles, who comes calling from the central office. (Don't worry if your 4-year-old eats paste, she advises. He'll get over it.)

As the day wears on, everyone waits for the boss, Mr. Raymond, played by Robert Foxworth, to make an appearance. When he finally shows up, it becomes apparent that there's something unsettling going on in this office. That's when "The Receptionist" takes a turn from the mundane to the sinister.

Bock's point, about how horrific things can take place amid the most ordinary circumstances, about how far people are willing to "look the other way" in the course of doing their jobs, isn't original, but it is thought-provoking.

I did get a little impatient with all the small talk, and about halfway through the play, wondered when something momentous was going to happen. When it finally does occur, I didn't find the resolution completely satisfying. I ended up with more questions. For example, how much did Houdyshell's character know about what kind of work was being done there? Was she an accomplice or a bystander?

Perhaps those are the questions Bock wants the audience to answer. Although he does offer a hint in the Playbill interview: "It's easy to forget what kind of living you're making. I think it's the fear of money. In The Receptionist, the receptionist Beverly has a vested interest in keeping her safety net at work strong. She's willing to look the other way at what happens."

Bock never spells out in so many words exactly what's going on in the Northeast office, or back at the Central Office, although he does drop a clue early on, during Foxworth's short prologue. (I admit I didn't pay attention to it as closely as I should have. It's the first thing we hear, and I just wasn't attuned to its significance. I remember wondering what it had to do with the play. I must make a mental note that at the theater, I can't just press rewind and listen again.)

Now that I know what's at the heart of "The Receptionist," it would be great to see it a second time, to look for all the clues I may have missed, and to once again enjoy Houdyshell's witty, endearing performance.

Pictured above are, from left, Josh Charles, Kendra Kassebaum, Jayne Houdyshell and Robert Foxworth.
Posted by Esther at 10:16 PM