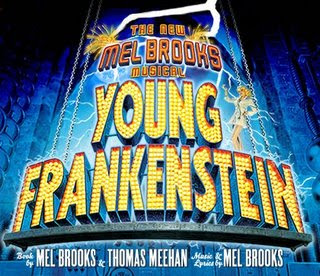 I've always been a Mel Brooks fan and "Young Frankenstein" has always been my favorite Mel Brooks movie. So to say that I've been eagerly anticipating its debut as a Broadway musical would be an understatement.

Judging from the reaction earlier this week at the Hilton Theatre, I wasn't alone. Even before any actors appear on stage, before the orchestra plays a single note, there's a big round of applause. Clearly, I'm among fans. The audience is pumped to hear their favorite dialogue, see their favorite scenes from the movie.

Well, after all the controversy over $450 premium tickets, over the refusal to release box office tallies, does Mel Brooks deliver? Yes and no. Judging by the amount of laughter and applause I heard, people probably went home happy. This is a very faithful adaptation of the movie in content, if not always in spirit. And I shared much, but not all, of their enthusiasm.

Don't get me wrong, I really enjoyed "Young Frankenstein" and I'm glad I saw it. There were many things about it that I loved, and I did laugh, just not as much as I expected. While all the memorable lines and scenes from the movie are in the musical, to my ears they sometimes fell flat. (Even though, I have to admit, they elicited plenty of applause from everyone else in the audience). This is the first musical I've been to where just the appearance of a set on stage got applause, because people knew what was coming next.

Being a fan of the movie is kind of a double-edged sword. I can't help but compare the actors to their counterparts in the movie.

Take Roger Bart's performance as Dr. Frederick Frankenstein. While I think he got better as the show progressed, in the early scenes he just didn't seem to create a very memorable character.

In the movie, when Gene Wilder says "my name is pronounced Frohn-kun-steen," you can sense from the tone of his voice the barely suppressed rage. It's a great moment, and I was really looking forward to Roger Bart's take on it. But when he says the same line, I simply didn't feel any of the same emotion. I thought to myself, "Is that it?"

I felt the same way in the scene where Frederick and his fiancee, Elizabeth, played by Megan Mullalley, are saying goodbye to each other. In the scene from the movie, between Wilder and Madeline Kahn, there's a subtle shift in Kahn's tone of voice between her rather breathless expressions of love and her admonition that Frederick not touch her too closely, lest he mess up her hair or fingernails. With Mullalley, the scene just didn't seem nearly as funny.

Part of the problem is that the Hilton Theatre is a cavernous venue by Broadway standards, and I think the show gets a little lost. I sat three-quarters of the way back, in the left orchestra. When I saw "Curtains" in April at the Al Hirschfeld Theatre, I sat in the third row, in the center orchestra, and I enjoyed it more than "Young Frankenstein." A large part of it was simply that I could see the actors's faces much better. I think that you simply see a different show up close.

The parts that worked best for me in "Young Frankenstein" were the ones where the actors seemed to just get a little zany, a little over the top, more madcap, where they used more physical humor that worked no matter where you were sitting in the audience. I laughed during the scene in the cottage where the blind hermit scalds the monster with hot soup. It's such a memorable scene from the movie that I think the audience would have been disappointed if it had been left out.

I loved the way Sutton Foster as laboratory assistant Inga rolls around in the haywagon and yodels en route to Frankenstein's castle. Andrea Martin is wonderfully creepy as Frau Blucher, who inspires terror in horses everywhere, and Shuler Hensley makes a very appealing monster.

For me, a highlight was Christopher Fitzgerald's hysterical turn as Igor. (Or Eye-gore). Of all the actors in "Young Frankenstein," he does the best job of taking a character from the film and making it his own. I reveled in Fitzgerald's performance from the moment he pranced across the stage in his black cape and ever-changing hump. I didn't even miss Marty Feldman's bulging eyes. He is absolutely wonderful.

Frankly, while the songs were funny, I didn't find them very memorable. Some of them, like "Transylvania Mania," didn't seem to move the story along. (I guess Mel just needed a big show-stopper to end the first act). But I loved the way director/choreographer Susan Stroman turned "Puttin on the Ritz" into a big song and dance number.

"Young Frankenstein" worked as a movie because it was a satire, a sendup of the horror movie genre. Transylvania in the movie was a dark and foreboding place. The musical tries to recreate some of that, with the look of Frankenstein's castle and laboratory, and I loved those sets and the sound and lighting. But overall, I wish "Young Frankenstein" the musical had been a little less cheerful, a little more tongue in cheek. Somehow, this Transylvania is a little too sunny and bright.
Posted by Esther at 8:48 PM

Great review, Esther. I completely agree that you have a different experience when you can see the actors' faces. But like you, I was too far from the ones in Young Frankenstein to be able to discern their expressions.

Thanks Steve! I appreciate the support and the encouragement.

With "Young Frankenstein," I honestly don't know whether I would have liked it more in the second or third row. It's entirely possible that the experience would have been more satisfying. In general, I agree with your view - closer is better.