I'm not much for reunions of the high school or college variety, but I made an exception for the reunion of former showgirls that forms the basis of Stephen Sondheim's Follies, which I saw this week in a terrific production at Boston's Lyric Stage. 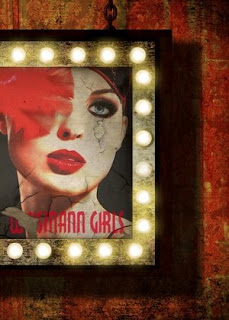 One of the things I admire about Sondheim is the way his work explores some meaty themes - the creative process in Sunday in the Park with George; the injustice of the class system in Sweeney Todd; Americans' obsessions with fame and guns in Assassins. I think of Follies as an examination of what happens as we age - how we look back at our youthful dreams with nostalgia and a twinge of regret that life didn't quite turn out the way we planned.

The story revolves around a group of showgirls who were stars 30 years earlier with the musical revue Weismann's Follies (based on Ziegfeld's Follies). Now middle-aged, they gather with their spouses in 1971 for a reunion in the Broadway theatre where they once performed, which is going to be demolished and turned into a parking lot. The set design, by Janie E. Howland, isn't very elaborate, as befits a theatre that's about to be torn down. We see the circular steps where the Follies girls used walk down and a torn curtain at the back of the stage, hiding the musicians, and that's about it.

Along with the crumbling theatre, the lives of these women are also in various stages of crumbling - their marriages are troubled, their children have grown up and left home, their bodies are breaking down. As if to bring the point home even further, another group of actors plays each character as the ghost of their former, younger selves.

While each former showgirl gets a star turn, the plot focuses mainly on two couples: Phyllis Rogers Stone and her husband Ben, played by Maryann Zschau and Larry Daggett; and Sally Durant Plummer and her husband Buddy, played by Leigh Barrett and Peter A. Carey. All four do a terrific job expressing their characters' insecurities and disappointments.

Phyllis and Sally were once roommates and Buddy and Ben were once best friends, but I gather that they haven't seen each other for a very long time. It seems like they each pine for what the other has: Sally and Buddy, a traveling salesman, moved to Phoenix and raised two sons, but Sally is still in love with Ben. Phyllis and Ben, a lawyer, live a high-society life in New York City but never had the children that she wanted. It soon becomes clear that the spark has gone out of both marriages.

And one of the things I loved best about Follies is seeing the characters' younger selves on stage at the same time we see them as they are today. The actors who play the younger Phyllis, Ben, Sally and Buddy - Amy Doherty, Josh Dennis, Michele DeLuca and Phil Crumrine, - really capture the eagerness and excitement of youth and they make for a fascinating contrast. At first, I thought it would be kind of confusing but it's such an imaginative idea and I think that this production, directed by Spiro Veloudos, the Lyric's artistic director, pulls it off so well.

Sondheim packs an awful lot into his lyrics. I loved Bobbi Steinbach's movie star Carlotta Campion singing "I'm Still Here," with all of its cultural references. There's the poignancy of Ben looking back at lost opportunities in "The Road You Didn't Take." And it was so touching to see all of the former showgirls parade like they used to in the old days in "Beautiful Girls."

As a lover of big Broadway dance numbers, I was absolutely thrilled by "Who's that Woman," led by Kerry A. Dowling as Stella Deems. It was so much fun to see all of the showgirls - mirrored by their younger selves - in the same routine, choreographed by Ilyse Robbins, with wonderful flashy, skimpy costumes by Rafael Jaen that really evoked the Ziegfeld era. You know, they may not move as quickly anymore but these women still have that love of getting up on stage and performing. It's like all of their worries fade away and for a few brief moments, they're young again.

There were some aspects of Follies that I didn't like quite as much. For one thing, I think that James Goldman's book could have used a bit of tightening. The 90-minute first act didn't exactly race by. Sometimes, we spend too much time on Sally and Buddy and Phyllis and Ben. I'd have liked to hear a little more about some of the other characters.

And I have to admit that at first, I couldn't figure out what was going on with Act II, when the linear storytelling comes to an abrupt halt, and each of the main characters gets his or her own Follies-style musical number.

I really liked Sally's "Losing My Mind" and Phyllis' "The Story of Lucy and Jessie." But what was it all about? Then I realized that it was about the characters' looking back at the follies of their own lives, and it began to make more sense. Follies is the kind of show where, now that I've seen it once and I know what it's all about, I think I'd get even more out of it a second time.

The original production of Follies opened on Broadway on April 4, 1971, and played a total of 522 performances before closing on July 1, 1972. In a 1985 article about a concert version of Follies, then-New York Times drama critic Frank Rich noted that the show was considered "downbeat" and was a commercial failure on Broadway. (Although it won seven Tony Awards.)

I don't think of Follies as a downbeat show. True, it's about looking back on the past and opening old wounds and dealing with regret. So of course there's a great deal of sadness and anger. But in a way, the ending is surprisingly sweet and sentimental. It's not about regrets but about making peace with the way life has turned out.
Posted by Esther at 1:28 PM

FOLLIES is brilliant. Sondheim never fails to amaze me. The encores production with Donna Murphy and Victoria Clark was magnificent.

Oh, I agree Joseph. I definitely need to get the Broadway cast cd to listen to the music again. And I'd love to see a Broadway revival of Follies - maybe with Christine Ebersole and Audra McDonald!

"There are also some great songs in Follies" may be the understatement of the year.


Audra's too young for Follies - perhaps in 10-15 years. Also, I'm not sure she's vocally right, but she can do just about everything so I wouldn't complain if she was in it.

Thanks, Sarah. I took that line out. And you're right, Audra is too young.