I could not believe what Bloomberg News theatre critic John Simon wrote in his review of The Pride, a production of off-Broadway's MCC Theater.

In discussing his reaction to the play by Alexi Kaye Campbell, which examines gay relationships in 1958 and 2008, Simon writes "Another problem is men kissing each other ..." Then he quotes this bit of dialogue:


Oliver: The blonde one’s had his tongue in the other one’s ear since we got here.
Philip: Yummy.
Oliver: They’re sweet.

He ends the review by remarking, "I wonder how mainstream audiences will take to Campbell’s tongue in their ears."

Wow. John Simon, if you think that two men kissing is "a problem" then you clearly have "a problem" with gay people. If you can't leave your homophobia at the entrance to the theatre, then you should not have reviewed this play. 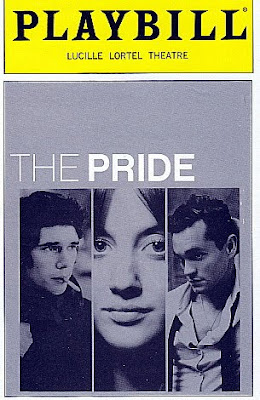 I mean, imagine the outcry if a critic had written about the musical Memphis, which features an interracial love story, "Another problem is a white man kissing a black woman." We would be outraged - and justifiably so.

At Parabasis, blogger Isaac Butler has gotten the discussion going. And apparently, Simon isn't the only theatre critic who has trouble keeping his prejudices in check. (Thanks to the West End Whingers for pointing out the following item.)

Christopher Hart penned this line in his review of Plague Over England in the London Sunday Times: “There’s also quite a lot of men kissing. I can cope with most things on stage — rape, torture, the plays of David Hare — but I still have to lower my gaze at men kissing.”

So you can put up with viewing rape and torture on stage but the sight of two men kissing forces you to avert your eyes from the horror? Unbelievable. Viewing violence against women is palatable to Hart but a display of affection between two men sends him over the edge.

I don't know whether this is simply a generational thing - Simon is 84. Or whether it's a matter of two male critics trying to prove their bona fides lest they be considered a little less than straight.

Whatever the excuse, both reviews are offensive. The stories of gay men and lesbians deserve to be told and their relationships deserve to be treated with respect. It should be that way in theatre reviews and in real life as well.

Personally, I have no problem with two men or two women kissing and being affectionate with each other. I think it's sweet. They're part of "the mainstream" and so are the rest of us who consider them friends, family, coworkers, neighbors.

The "problem" as I see it is letting the bigots control the conversation. Their voices shouldn't be the only ones that get heard.

Thanks, I really appreciate it. Sometimes I feel like I'm just preaching to the choir but I also feel that it's always important to speak out against bigotry.

it never ceases to amaze me that a person in the theater community, and i include mainstream critics in the community, can harbor such outward homophobia. given the makeup of the creative force, its shameful - if not outright bigotted.

You raise a good point. For the life of me I don't know how theatre critics, who presumably come in contact with gay and lesbian people all the time, can be so bigoted. Sadly, proximity doesn't always lead to understanding. I wish it did. You're right, it is shameful. Thanks for the comment.

Hey Bob, I'm not that familiar with John Simon so I don't know. Maybe I'll do a little Googling!