Camelot, at Trinity Rep
Gratuitous Violins rating: *** out of ****

It's Sept. 27, 1940, the middle of the Blitz. To escape German bombing raids, 117,000 London residents have taken refuge in tube stations deep underground, including one where a troupe of actors is putting on Camelot.

This is a Camelot that tells the story of King Arthur and the knights of the Round Table without castles or medieval costumes. The actors wear 1940s-era street clothes and set designer Eugene Lee has built a dark and dingy train platform cluttered with mismatched furniture. A five-piece band tucked in a corner provides the music. 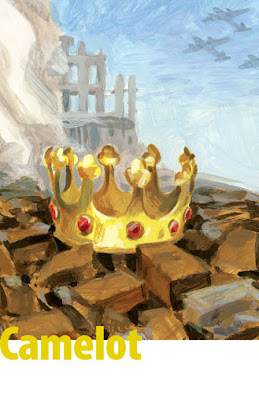 I have to give artistic director Curt Columbus credit for coming up with a fresh concept for a 50-year-old musical to open Trinity Rep's season.

But I realize Camelot's shortcomings: the plot is a little convoluted and in between the songs the story can drag. It's a 2 hour and 40 minute show and at times, I really felt the length.

Luckily, I enjoyed the performances and the humor that infuses this production.

Stephen Thorne was appealing as King Arthur, a reluctant monarch who establishes the Round Table, with its ideals of honor and justice, "to fight for right, not might." Rebecca Gibel made for a glamorous, self-assured Queen Guenevere and Joe Wilson Jr. was terrific as the charming but pretentious Frenchman Lancelot.

And I've always loved Lerner and Loewe's score: "If Ever I Would Leave You" and "Camelot" are especially beautiful. Wilson was hilarious with "C'est Moi," arriving on a motorbike, bounding into the audience and handing out 8 x 11 glossies of himself.

For Americans, Camelot, which opened on Broadway in 1960 and ran for 873 performances, has become indelibly connected to the presidency of John F. Kennedy.

But the musical is based on T.H. White's The Once and Future King, written between 1938 and 1941. Columbus says White "was using Arthur, Merlyn, Guenevere, and Lancelot as voices of civilization and hope for the continuance of British identity in the face of the German onslaught at the beginning of the Second World War."

That point is brought home through a newsreel featuring British Prime Minister Winston Churchill, the WWII-era posters that line the wall of the subway platform, sounds of bombs overhead that occasionally cause plaster to fall from the ceiling.

Despite all that, with one exception I didn't feel much of an emotional tug during Camelot, a sense that this musical was being put on during a terrifying, devastating time. I don't know, maybe in return for giving up the majesty I was expecting a little more Blitz spirit.

The exception was the final scene, which was beautifully staged and had me close to tears. Still even then, hearing Arthur's iconic words I wasn't thinking of the perseverance of the British people but of a young president cut down and a nation plunged into mourning.

Maybe that other connection is simply too ingrained.
Posted by Esther at 10:45 PM

Sounds like a very cool concept even if it didn't come across that well. CAMELOT is LONG no matter the way they do it. We did it in high school - actually I was on makeup crew but I'll never forget our Guenevire singing the Lusty Month of May from a swing on stage. It was so great. I saw the concert version w/ the NYPhil a couple of years ago - B.O.R.I.N.G. except for Marin Mazzie and Nathan Gunn.

Thanks for the comment. My only previous exposure to Camelot was watching the movie on TV as a kid. I'd forgotten how long it was. But like I said, I do enjoy the music. And I did take away some good memories from this production. But I think it was more than enough Camelot for me!

Well, I don't know. I saw it in Boston prior to its opening on B'way, with the original cast, and don't remember it being long at all. I could have listened to Burton and Andrews sing all night. I know it has gotten a dim reputation over the years, but I was a 20 year old college student, and excited to be seeing the show, which had gotten a lot of advance publicity after My Fair Lady. Moss Hart was in the hospital after a heart attach in Toronto, and we were all hoping it would be a success and that he would recover. I didn't think the NY Phil performance was very good at all, in spite of a good cast. Maybe if I were seeing it for the first time now, at a much more mature age, I wouldn't be as excited, but I still remember that night!

Thanks so much for the comment, Kathy. Wow, if I'd seen Richard Burton and Julie Andrews I'm sure I would have felt the same way! What an incredible experience that must have been. It's so sad that Boston isn't really a tryout town for Broadway anymore. Btw, if you haven't read it, I recommend Julie Andrews' memoir, "Home." She talks about My Fair Lady and Camelot.