One of the (many) things I love about going to the theatre in New York is a chance to see actors whose work I've enjoyed in movies and on TV. It's a thrill to see them up close and personal.

But tonight, I'm excited for the opposite reason. I'll be watching Detroit 1-8-7 (ABC, 10 p.m.) to see Jon Michael Hill, who made an impressive Broadway debut last fall in Tracy Letts' play Superior Donuts.

I loved the play and Hill's engaging portrayal of a streetwise teenager with literary aspirations, which garnered him a Tony nomination. So I'm looking forward to the TV debut of a fine young stage actor and Steppenwolf Theatre Company member. 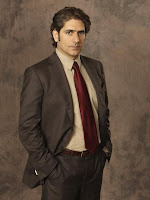 And even better, he's paired in this cop drama with Michael Imperioli, who was terrific as mobster Christopher Moltisanti on The Sopranos, one of my favorite TV series.

Imperioli's character is on the right side of the law this time, as Detective Louis Fitch, a veteran of the homicide squad. Hill is his new-to-homicide partner, Detective Damon Washington.

It'll be interesting to watch both of these actors tackle roles very different from the ones I've seen them in before. I'm hoping they'll make a great team solving crimes and bringing bad guys to justice in the Motor City.

I don't know if a theatre saying is appropriate but break a leg, Jon!