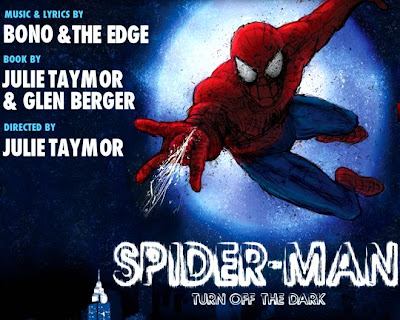 I'll admit that hearing a song out of context is not the best way to sell a Broadway show. Still, I was underwhelmed by the debut of a song from Spider-Man: Turn off the Dark on Good Morning America.

First of all, the cameras should have taken us inside the Foxwoods Theatre for a tour and an interview with director Julie Taymor. Having her sitting in the GMA studio, holding still photographs of the set and costumes on her lap, didn't do much to convey the tremendous scope of this production.

I mean, according to an interview in The New York Times with lead producer Michael Cohl, the musical has a price tag of $60 million, making it the most expensive show in Broadway history. C'mon, show me how spectacular that set looks. Make me think I need to get my ticket now.

(Interestingly, the article notes that Cohl got his big break as chief promoter for the Rolling Stones "Steel Wheels" tour, which I saw in Syracuse in 1989. I remember it was a big deal - everyone I know went - and I think I still have my bootleg T-shirt somewhere.)

There are two reasons I'm interested in Spider-Man. One is Taymor, whose work on The Lion King I loved. And the other is the music, written by Bono and The Edge, from U2, a band I love (at least their early stuff).

It was different from a traditional show tune and I like the idea of mixing up the sound on Broadway. There ought to be all different kinds of music on the Great White Way.

But it struck me as a generic slow rock song from a slight twentysomething with his hair falling in his eyes. Plus, Carney was slurring the lyrics so much that I could hardly understand them. And he's not exactly a commanding presence onstage. Hope he's got enough stamina for eight shows a week.

You can watch his performance here:

Having a national television audience, I was hoping the creative team would come up with something a little more jaw-dropping than what I saw. Don't get me wrong, I'm still interested. But I think they hit a single when they should have been trying for a home run.

I know Taymor will definitely make it visually interesting, but that song nor that performance did pretty much nothing to excite me about the show.

Yeah, I agree. Pretty lackluster considering this was the musical's chance to introduce itself to a nationwide audience.

I really appreciate your fair assessment of what you actually saw, Esther. I take great issue with comments around the web on other sites that dismiss the whole thing is if what they saw was the actual show or something. (I have a rant that will post on my blog tomorrow addressing just that.)

I think everyone needs to remember the context of the GMA performance: A rock band performing a rock song. But I couldn't agree more about his enunciation. Let's hope he was being a "rock star" today, rather than a leading man on Broadway!

(And let's face it, a rock song will gain more notice than a show tune from most of America. We all assess it from a theatricl POV; the rest of the world doesn't see it like that. Yet.)

I think the difficulty of watching a performance out of context really hit me this summer, when I saw La Cage Aux Folles, The Addams Family and Fela! after the Tony Awards, after all the TV appearances. You don't really know how a show will hit you emotionally until you see it onstage. A 3-minute performance just can't provide the same impact.

In terms of Spider-Man, I guess I was just hoping to see more of what they spent that $50 million on!

Anyway, looking forward to reading your take on it!

What good would it have done to go inside the theatre? The load-in hasn't occurred yet. That's pointless. It's big enough that GMA bothered to get the Hudson for a larger performance than what's available in their studio.

Thanks for sharing the video. Given that it was a rock band performance of the tune rather than one delivered for the show, I think it sounds pretty wonderful. As JK has mentioned, you have to listen to it in that context.

Also, I enjoyed seeing the sets and costume designs Julie Taymor provided. I was thinking to myself, "Wow! A pop-up set design. How innovative." Whether it will be eye-popping as well remains to be seen.

Suffice to say, I was intrigued in a positive way.

Thanks for the comment, Steve. Yeah, JK does make a good point. I guess I was expecting more of a "show" number and that's not what it was designed to be.

I mean, I'm still interested because it's Julie Taymor's concept and Bono's music and I always want to see just about everything on Broadway! ;-)