A Broadway centennial for Helen Hayes 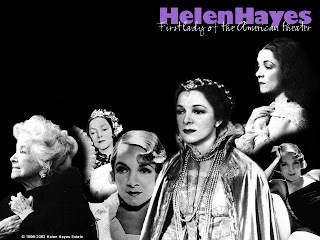 I'd like to give a shoutout to Helen Hayes, the first lady of the American theater, who made her Broadway debut 100 years ago today.

At age 9, Hayes played the Little Mime in Old Dutch, a two-act musical farce from Victor Herbert set in the Hotel Schoenwald in the Tyrol. It opened at the Herald Square Theatre, at Broadway and 35th Street, and ran for a total of 89 performances, closing on Feb. 5, 1910.

Of course Hayes went on to many more roles on stage, screen and television. She's one of only 10 people thus far to win the four major American entertainment awards - an Oscar, a Tony, an Emmy and a Grammy.

In Time Remembered, a romantic comedy by the French playwright Jean Anouilh, Hayes played the Duchess of Pont-au-Bronc, opposite Richard Burton. In Happy Birthday, a comedy by Anita Loos set in the Jersey Mecca Cocktail Bar in Newark, Hayes played librarian Addie Bemis.

When Hayes died in 1993 at age 92, The New York Times obituary noted the acclaim she received for her stage roles as Mary, Queen of Scots and Britain's Queen Victoria.

In his review of Mary of Scotland, from 1933, Times critic Brooks Atkinson noted, "Slight as she is in stature (and Mary was six feet tall), Miss Hayes raises herself to queendom by the transcendence of her spirit."

Two years later, Hayes opened in Victoria Regina, in which she aged from a young girl to an elderly woman. Atkinson said her ability "to encompass in one evening the youth, maturity and venerability of one human being" was "a humbling personal triumph."

Hayes' final Great White Way appearance came in 1970, in a revival of Harvey with Jimmy Stewart, capping a Broadway career that spanned 61 years.
Posted by Esther at 1:30 AM