Yesterday I picked up a copy of Free for All, by Kenneth Turan, an oral history of Joseph Papp and New York's Public Theater. I've just started thumbing through it but so far, it looks pretty interesting. 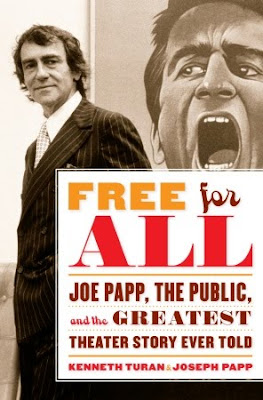 I first heard Papp's name when I was a teenager. I remember watching a play from the New York Shakespeare Festival on TV and being enthralled by it. I'm fairly certain it was this production of Much Ado About Nothing that aired on CBS in 1972.

Last fall, I made my first visit to the Public, for Stephen Sondeim's Road Show. I'll admit that Sondheim wasn't the only draw. I also wanted to see the place where landmark musicals like Hair and A Chorus Line were nurtured.

And yes, there was one other important reason - Kevin Spacey worked there briefly, after dropping out of Juilliard. (There's a Kevin Spacey connection to everything!)

I don't think this story is in the book but I've heard Kevin tell it many times in interviews and it's a nice one. 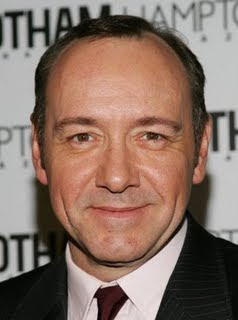 Here's an account that appeared in the Oct. 24, 1999 issue of Parade magazine:

"I had no prospects, no agent, no money, nothing. Then I got an audition for the New York Shakespeare Festival in the Park by basically browbeating the casting office. I played a messenger with, like, six lines in Henry IV, Part One. It was my first job in New York as a professional actor, and it was pretty exciting, but after that I just couldn't get any acting work.

"I was working as a hat-check guy in a restaurant when I decided to see Joe Papp for a job." [Papp was the influential founder and director of the New York Shakespeare Festival. He gave Spacey a job as office help.]

"While working there, I got cast as the lead in an off-off Broadway play, The Robbers, and got my first New York review - in the Village Voice. It was extremely complimentary, because they compared me to both Marlon Brando and Karl Malden in the same sentence, so for weeks my friends called me 'Marlon Malden.'

"Joe Papp showed up at the play one night and fired me the next day. I was stunned, because it was paying my rent. Joe said, ‘I saw an actor last night onstage, and you've become too comfortable here.’ He did me the greatest favor in the world by literally shoving me out the door.

"Four months later, Joe was in the opening-night audience of my first Broadway play."
Posted by Esther at 10:00 AM

What a great story. I guess we all can use a kick in the pants every now and then. Even Kevin Spacey.

I've heard Kevin tell the story in interviews and he mentions that Papp gave like a month's pay to ease the transition! And yeah, it was exactly what he needed. Kevin was getting a little too comfy handing out notebooks and pens.

When I went to the Public, btw, someone also told me that Kevin used to sweep out the theatres after a show as part of his duties!