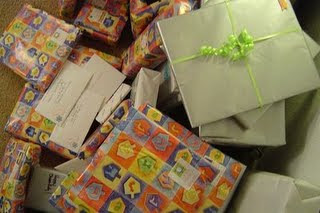 It's time to pick out a gift for the theatre lover in your life.

Here's my 2008 list and all of the items on it are still highly recommended. But I want to add some new choices to the mix. I've stayed away from movie musicals and cast recordings, figuring they'd have those already.

And as I noted last year, these are great for Christmas, Chanukah, birthdays or any other time of year that you want to do something special for someone special.

1.) Free for All, by Kenneth Turan. I've just started reading this oral history of Joe Papp, founder of New York's Public Theater and the man who brought free Shakespeare to Central Park, and I'm really enjoying it. I'm especially looking forward to reading about the role Papp played in bringing musicals like Hair and A Chorus Line to Broadway. The story of how Free for All finally came to be published is interesting too.

2.) The Play that Changed My Life. This compilation, put together by the American Theatre Wing and edited by Ben Hodges, features essays by and interviews with a diverse group of 19 playwrights, all talking about the works that influenced them. It's always interesting to read what inspires people, especially if you're an aspiring writer yourself.

3.) Ticket album. My friend and fellow blogger Jan, from Broadway & Me, included this item in her list last year and I thought it sounded like a good idea. Then I got one as a gift and I love it! Now, if I want to know when I saw a show, where I sat or how much I paid, I have this close by. The slots are perfect for a Broadway ticket but you'll need to do a little snipping to make bigger ones fit.

4.) For me, one of the highlights of Finian's Rainbow on Broadway was listening to the delightful Kate Baldwin sing "How Are Things In Glocca Morra?" So beautiful. Her first solo cd, Let's See What Happens, includes that song and others by composers Burton Lane and E.Y. "Yip" Harburg written from the 1940s to the 1960s.

5.) Sadly, I never got to see Forbidden Broadway, the show that spoofed Broadway shows. But I have bought a couple of their cds and the songs are very funny, especially if you recognize the originals to which they're paying homage. The 20th anniversary compilation is a good mix of tunes poking (gentle) fun at some classic musicals.

6.) Who wouldn't want theatre tickets, right? Regional theatres do great work and they add so much to the cultural life in their communities. The League of Resident Theatres has links on its Web site to 76 theatre companies across the United States. This is a chance to give a memorable gift while supporting the arts at the local level.

7.) Okay, I know I was going to stay away from cast recordings but if there's a child on your list who loves Disney movies, cds from the musical versions of The Lion King, Beauty and the Beast, Mary Poppins or The Little Mermaid can be a great way to introduce them to the wonderful world of show tunes.

8.) I always like to have something from Broadway Cares/Equity Fights AIDS on my list because the money it raises helps support critically needed services all over the country. Last year, I bought the 10th anniversary, two-disc Carols for a Cure. This year's catalog is full of terrific gifts. But a purple piggy bank caught my eye. It's never too early to start saving up for your first Broadway show!
Posted by Esther at 10:30 AM