Catching up with Jan Maxwell

One of the many pleasures of taking in The Royal Family on Broadway was being introduced to Jan Maxwell. I'd never seen the Tony-nominated actress but I'd heard great things about her - and she was terrific as the daughter in a famous 1920s theatrical family. 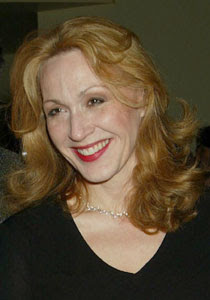 So to catch up on Maxwell's career, I listened to an interview from last fall with the American Theatre Wing's Downstage Center program. It's always interesting to hear performers talk about where they're from and how they got their start in the business.

In Maxwell's case, she grew up in West Fargo, North Dakota, the daughter of a lawyer (and later a judge) who was also a theatre lover, an amateur actor and a playwright. She's also the sister of experimental theatre director and playwright Richard Maxwell.

And a fun piece of trivia: Maxwell got her Equity card after being cast as the understudy for the role of Lily St. Regis in a bus-and-truck tour of Annie.

Since I made my first visit to Minneapolis' Guthrie Theater last year, and I wrote yesterday about the play that changed my life, I especially liked this quote:

"When I was 16 we took a field trip to the Guthrie and I saw Tennessee Williams' Streetcar and it was pretty much a life-changing event for me."
Posted by Esther at 11:45 AM