After 86 years Little Orphan Annie, that spunky redhead who survived all sorts of hardships, disappears from the comics pages along with Daddy Warbucks and her beloved pooch, Sandy. 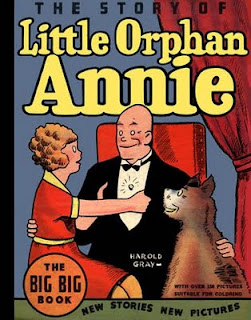 Today's strip is the final one. Apparently it was running in fewer than 20 newspapers, including The Daily News, which had been carrying the comic since its debut in 1924.

But don't despair. Annie will be around in some fashion, according to Steve Tippie of Tribune Media, which owns the license to the character. Among the possibilities he mentions are TV, games and graphic novels.

And there are plans for a 35th anniversary Broadway revival of the musical Annie in 2012.

I saw a lackluster tour of Annie last year (the audience, filled with young children who were really too young to be there, didn't help).

Still, I love the way the book, by Thomas Meehan, and the score, from Martin Charnin and Charles Strouse, manage to evoke the Depression-era 1930s. I'd definitely see a top-notch production.

And I would like to believe there's some truth in this quote:

"Annie is one of those iconic characters in American culture," Tippie says. "If you stop 10 people on the street, nine of them will drop down on one knee and start singing 'Tomorrow.'"
Posted by Esther at 12:15 AM

Wow, Esther, I just found you while googling "Annie"! Meghan wants to audition for the broadway Annie coming in 2012. I don't know how to do that, so I was searching! Thanks for your kind comments about Meg singing! ttyl -Ellen

Hey Ellen, thanks for leaving a comment! Good luck to Meghan. If I see anything about auditions I'll let you know. Playbill.com does have job listings on their site but Annie is a long way off. I love Wicked and "For Good" is one of my favorite songs. I love that it's about friendship.