Snapping up a ticket to The Addams Family 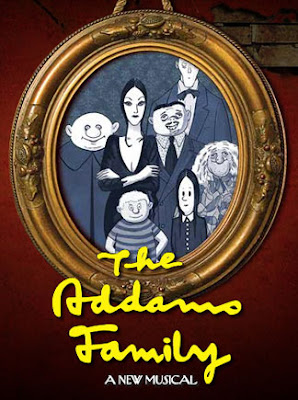 And from my purely unscientific survey, I don't think that attendance is going to drop off anytime soon.

There's a new feature at Ticketmaster that allows you to select your seat. I've been looking at tickets for late July and great swaths of the orchestra have already been sold. (The regular-priced orchestra, that is. There are still plenty of premium seats.)

Surprising? Not at all.

It's got name recognition from the TV series and movies and the two stars, Nathan Lane and Bebe Neuwith, help, too. It's a known quantity, which is comforting when you're shelling out $136.50 apiece for tickets.

But I think there's something even more important.

Every once in awhile I read the travel forums at Fodors.com. Lots of people who are coming to New York on vacation, and bringing their kids, want advice about a Broadway show. It has to appeal to mom and dad, teens and preteens, boys and girls.

Well, The Addams Family fits the bill, especially if they've already seen some of the other long-running musicals. Prominently displayed on its Facebook page is: "This show is family friendly and appropriate for children ages 10 and up."

So when it comes to musicals, family friendly can trump Ben Brantley.
Posted by Esther at 8:53 PM

Esther, I saw this show in April and thoroghly enjoyed it. It's campy and fun with lots of great special effects. Bebe Neuwirth and Nathan Lane were both fantastic. It's exactly what you would expect. I think you will enjoy it. I hope you are able to find some good seats for late July. Can't wait to read your review.

Thanks, Pam! Good to know you enjoyed it. I did find a regular-priced center orchestra seat. I've heard good things about Nathan Lane especially and I'm looking forward to the special effects. It'll be my first time in the Lunt-Fontanne, too, so I can cross another Broadway theatre off my list. I just want to laugh and be entertained. That's not asking too much, is it?!

When are you seeing AF, Esther?

I caught the Chicago tryout, and liked it.

Thanks, Bob! I'm seeing it in late July. I was kind of torn but SOB says the Broadway version is improved over Chicago and he thinks I'd get some laughs out of it. I need to laugh and forget my problems for 2 1/2 hours. Plus, it'll be fun to discuss a show that my Chicago theatre friends have seen, too.

Hi Esther...I really enjoyed my visit to your blog. I think you might enjoy mine as well, it's filled. It's an illustrated chrnicle of my dreams, filled with drawings of Broadway types, amongst others. jiminysnap.com

Thanks for the comment and for reading my blog. I did check out your blog. I can't believe you remember so much about your dreams! I always forget mine shortly after I wake up. And few are Broadway-related. :-(