The 64th annual Tony Awards, recognizing the best of Broadway, are tonight!

Despite the exclamation mark, my anticipation level is a little lower this year since I haven't seen any of the shows that opened on Broadway in 2010. 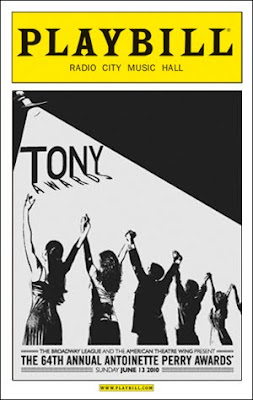 Still, I'll be looking forward to a glimpse of the ones I haven't seen and rooting for the nominees from the first half of the 2009-2010 season.

I enjoyed them all but I'd be especially delighted if Jon Michael Hill wins for Best Featured Actor in a Play for Superior Donuts and Montego Glover for Best Actress in a Musical for Memphis.

And hearing Angela Lansbury sing in A Little Night Music was such a thrill, I'll be cheering if she raises one of those new taller, heavier Tonys over her head in triumph.

What's amazed me in the run-up to the Tonys this year is the coverage - in print and from online sites, in blogs and on Twitter.

While it's been tough to keep up with all of the interviews and predictions and looks back at the Broadway season, what a great feast from which to pick and choose.

Among the absolute best pieces I've read is today's New York Times interview with Lifetime Achievement Award recipient Marian Seldes. I had the great honor of seeing her and Angela Lansbury on Broadway in Deuce in 2007.

Finally, I want to send my congratulations to David Hyde Pierce, recipient of the Isabelle Stevenson Award in recognition of his work with the Alzheimers Association.

One of my favorite Tony moments was jumping up from the couch and cheering three years ago when he won for Best Actor in a Musical for Curtains, the very first musical I saw on Broadway.

The non-televised portion of the Tonys - where awards for design, book of a musical, score and choreography are handed out - will be at 7 p.m. You can watch online at Broadway.com. The prime-time portion, hosted by Promises, Promises nominee Sean Hayes, begins at 8 p.m. on CBS.
Posted by Esther at 10:00 AM

I'm looking forward to the big show but have to say I haven't seen anything this season either, what the heck is wrong with me?!

Hey Dale, thanks for the comment and thanks for continuing to read my blog. Unfortunately, my other responsibilities have made it difficult to get to New York City this year. But soon hopefully! Hope you get there, too.