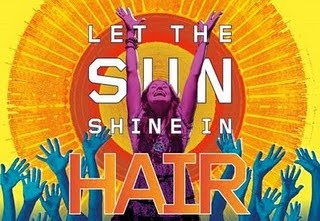 The show in which I made my Broadway debut - Hair - is closing today at the Al Hirschfeld Theatre after 548 performances and a Tony for Best Revival of a Musical.

I wish it could have run longer but one thing I've learned, except for The Phantom of the Opera nothing lasts forever.

I love the songs from Hair, I saw the movie in 1979 and I caught a touring production once in Syracuse, years ago.

But this revival, directed by Diane Paulus, is the one that truly got to me. I love the way it evoked the be-who-you-are spirit of the 1960s while not ignoring the more tumultuous events. Here's my review.

Inviting the audience onstage at the end of the show was a perfect way to celebrate a decade that was all about breaking down barriers. It was a thrilling experience and I'm happy I could share it with Kevin, my friend and fellow blogger.

(And how great was it that the cast of Hair were such strong supporters of marriage equality, bringing forward the decade's commitment to freedom and social justice.)

Paulus could have turned Hair into an exercise in hippie nostalgia - a look back at a time of sexual liberation, when young people dropped out, got stoned, wore tie-dyed shirts and bell bottom trousers and men grew their hair long.

Instead, she made the story relevant and compelling by keeping the focus on the most divisive and politically charged aspect of the decade - the Vietnam War.

Through Gavin Creel's terrific portrayal of the conflicted Claude, the musical brought home the difficult choices young men faced. Young men, that is, who weren't as fortunate as Dick Cheney or Richard Blumenthal.

For me, more than the fashions and hairstyles, Claude's plight was a stark reminder of how much has changed.

There was an article last week in The New York Times that pointed out, America's "all-volunteer military continues to fight two wars that the vast majority of American society pays little or no attention to."

Forty years ago, at the height of protests against Vietnam, that detachment would have been inconceivable.

I saw Hair on Memorial Day weekend in 2009. It's a powerful reminder of the care we should take before sending Americans into harm's way, whether they're draftees or volunteers, our loved ones or someone else's.

While Hair is closing on Broadway, a national tour begins this fall. I am so glad I had a chance to see it.
Posted by Esther at 10:15 AM