Should the Tonys invite off-Broadway?

I have to disagree with Bloomberg News writer Jeremy Gerard, who argues that the Tony Awards should expand to include off-Broadway plays and musicals.

I understand his point - the best theatre in New York City doesn't always take place from 41st to 54th Streets, with a quick detour to Lincoln Center. Over the past few years, I've seen terrific off-Broadway productions and some Broadway shows I could have missed. 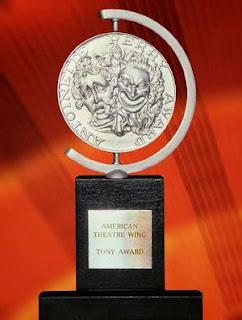 But the Tonys, in addition to recognizing artistic achievement, are also a marketing tool, just like the Oscars, the Emmys and the Grammys.

People who tune in Sunday to watch the Tonys (8 p.m. CBS), including some of the tourists who buy 65 percent of the tickets to shows, are watching because they want to see "Broadway." No disrespect to the rest of New York theatre but I think that's pretty indisputable.

The Tonys and Broadway are inextricably linked in the public's mind. It's "Broadway's Biggest Night." And Broadway, for better or worse, has name recognition.

The Broadway League and the American Theatre Wing have a stake in protecting the Tony Awards brand. Once the Tonys become a mix of Broadway and off-Broadway, you've diluted the brand in the eyes of the viewing and ticket-buying public.

Besides, even if off-Broadway shows were eligible, it still wouldn't make Gerard's last statement true:

"Off-Broadway has been playing the supporting role for way too long. It’s time for the Tony Awards to invite everyone into the tent and give real meaning to the phrase 'outstanding achievement in the theater.' ''

If you really want the awards to reflect outstanding achievement, then you would have to include all of the great work being done by theatre companies across the United States, not just give out one regional Tony per year.

All you would accomplish by including off-Broadway is to turn the Tony Awards into "outstanding achievement in New York City theatre." And I'm sorry but that doesn't sing quite like "Broadway."
Posted by Esther at 12:30 AM

I would argue that people who tune in just to watch Broadway do so only because they don't realize there's other theater. Expanding the awards would help visiting tourists not only find cheaper shows, but better shows. This "inextricable link" is meaningless, especially to tourists: if you were to tell someone who had never been to NYC that the Women's Project was on Broadway, they wouldn't know otherwise, likewise for Signature, Playwrights, MTC, and many others.

You'd hope, in any case, that the work would speak for itself, and that if Red were playing at Barrow Street, people would still flock out to see it (as they do for Our Town). I agree that it might not sing as well to say "a celebration of New York City theater," but in my mind, it would have a much better effect: it would remind practitioners and producers alike that Broadway--and the national recognition it entails--is not the end-all-be-all for a new work.

the real reason this argument's cropped up this year is that this broadway season was a bit of a let-down. the times's two critics rated it a b-, and i have to agree. especially when compared to a generally stellar off-broadway season. while there certainly is an argument about honoring the best of off-broadway in an integrated ceremony. but, the two cannot be thought of as the same. the scale and demands are ultimately different in the execution of the pieces.

I agree with you on this one.

The Obie Awards are very well known, and cover Off Broadway productions in much the same way the Tony Awards cover "The Great White Way". Many people consider the winning of an Obie is just as remarkable and powerful as winning a Tony - because you are still being recognized for excellence in theatre, which considering how many people are simply trying to get hired, is always a top achievement. In my opinion, the only reason the Tony Awards seem to carry more weight is because Broadway has always carried the most weight when it comes to theatre, even though there is incredible theatre being produced all over the country.

There are plenty of tourists who go to NYC to see Off-Broadway productions exclusively. I have many friends who have no interest in Broadway productions, and are more interested in the outcome of the Obies than the Tonys (as an example).

I think the two are extremely different markets, operating on very different budgets, contracts, producer investment, etc. so to say they should be included in the same awards show, because they're simply residing in the same city, would be unfair to both (in my opinion), and perhaps even insulting to professionals working in either arena.

Thanks for the comments!

Aaron: I agree about the importance of getting tourists to broaden their horizons. And it would be great if off-Broadway got some national TV exposure. I'd be all for redefining Broadway to include more theatres.

But I see this more as a marketing and branding issue than an artistic one. And "Broadway" is what sells the Tonys. I mean, why would CBS devote 3 hours to celebrating New York City theatre as opposed to Chicago theatre? I'd watch the show online or on PBS but I'm pretty certain the Broadway League wants the Tonys on a national, commercial TV network.

ShoNuff: This issue comes up with the Pulitzer Prizes. There's no size category for newspapers so what ends up happening is The New York Times, Washington Post, etc., almost always win a lion's share of the prizes. Although every year, they try to throw a bone to a smaller paper - maybe in the public service or editorial writing categories.

Meg: A friend who was going to visit New York with her husband and teenage son asked me for some advice about a show. They ended up picking an off-Broadway play I haven't seen - and they loved it.