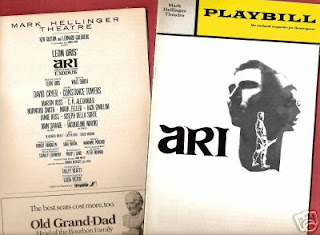 Thanks to Kevin at Theatre Aficionado at Large I've been browsing through a very cool collection of poster art from Broadway musicals.

I found one for the very short-lived musical Ari, based on the bestselling novel Exodus, by Leon Uris, about the founding of the State of Israel. (The Playbill is from eBay.)

I never knew there was a musical version of Exodus until I read Everything Was Possible: The Birth of the Musical Follies, by Ted Chapin, who mentions it briefly. With Passover starting tonight, what better show to write about!

Uris adapted his 1958 novel for the stage and wrote the lyrics. The music was composed by Walt Smith, about whom I haven't been able to find anything. Perhaps this was his first and only foray into musical theatre.

The musical takes place in Cyprus in 1947, so apparently it only covers the first part of the book, when Jewish refugees are trying to break the British blockade and reach Palestine.

In the show's cast were David Cryer as the handsome and fearless sabra Ari Ben Canaan, and Constance Towers as his love interest, the American Kitty Fremont.

(Their roles were played by Paul Newman and Eva Marie Saint in the 1960 movie version of Exodus. Too bad they couldn't have gotten Jill Haworth, who was a young Jewish refugee in the movie and grew up to be Broadway's original Sally Bowles in Cabaret.)

After a tryout in Washington, D.C., Broadway previews began on Jan. 6, 1971, at the gorgeous Mark Hellinger Theatre, now the Times Square Church, which, thanks to Kevin, I had the great fortune to tour last fall. Ari opened on Jan. 15 and closed on Jan. 30.

Some musicals were just not meant to be, I guess.

This is hard to believe but the show's producers, Leonard Goldberg and Ken Gaston, had even worse luck with their next Broadway musical, Heathen!, set in Hawaii in 1819 and 1972. After six previews at the Billy Rose Theatre, the show opened - and closed - on May 21, 1972.

Now that there's a native of the Aloha State in the White House, maybe it's time for a revival!
Posted by Esther at 10:00 AM

You know, I have the book and I have the DVD but have never gotten around to either, though it sounds like my kind of story. Will get on that!

I just think it's fun to research these obscure musicals. I'm sure "Ari" never even had a cast recording. And "Heathens!" how can you not love it with a name like that!

One of the best resources on obscure musicals is Ken Mandelbaum's book "Not Since Carrie" which takes a look at flops from the 1940s to 1950s. It's a fascinating read and I highly recommend it.

The man who composed the music for Ari, Walt Smith, is a jazz pianist currently living on the Western Slope of Colorado. He has received some national acclaim as a fine live jazz performer.

As far as I know, you are correct in your assumption that this may be the only music theatre project on which he worked.

Hey anonymous, thank-you very much for the information about Walt Smith. As a fan of Mr. Uris' book, I would love to have seen "Ari."

I saw this show in 1971 when I was 15. Who knew that my parents managed to score tickets for a show that came and went within a month!

Thanks for the comment! As a fan of the book and the movie Exodus I would love to have seen the musical. You definitely have bragging rights! Did you enjoy it?

Walt Smith resided in Grand Junction, Colorado. He was married with three daughters.

He performed a lot in Aspen at the Tippling. My wife lived across the street and was a very good friend of one of the daughters.

Ari tried out at the Schubert Theater in Philadelphia prior to going to Broadway. I know because I played viola in the pit orchestra. I remember it being an elaborate production featuring Constance Towers in the female lead. The score had an almost symphonic heft to it.

Wow, thanks for leaving a comment! As you can probably tell, I haven't been blogging in awhile, so it's nice to know people are still reading. Wish I could have seen the musical.

I was involved with ARI, as part of producer Ken Gaston's staff. This production had so many problems from the get-go. It was doomed from the beginning. Leon Uris had worked for months trying to get the script to work, but it just seemed like it kept getting worse. The score was dreadful. Gaston's option on the show was about to run out, and even tho he knew the show was terrible, he decided to mount it anyways. Not surprisingly, it had a huge advance at the box office - well over $1M, which was huge for 1971.
The production was absolutely garganuous, and although the Hellinger Theatre is huge, just offstage left is a brick wall that totally limits any storage of sets over there. When we moved into the theatre, we had a major problem with the sets, because of that. Robert Randolph had completely miscalculated the storage space for the sets. They had to be redesigned, taken back to NJ where they were built, broken down, and rebuilt so that they'd fit in the theatre. That postponed the opening in NY. Again. At a considerable cost to the production.
There were many other terrible things happening as well, which I won't go into, but one of the craziest things I'll never forget, is that the show-the actual script & musical numbers-Never got locked in! Even after opening night. Typically on B'way, whatever show you perform on opening night, gets 'locked in' and becomes the final script that you'll perform each performance thereafter. There was Never an official script for ARI. It changed every single night! (I can count on one hand, the number of pages from the original script, that were ever used in a performance of this show!) Every single perf, they were giving cuts, and new pages & songs to the cast members for the next night. Entire roles were being written out and new roles written in! It was total craziness! If you look on IBDB, to this day-more than 40+ yrs after it's opening, you'll see that the show's credits have never been verified, because of this. Cast members came and went, nearly every day. There was so much confusion, that the cast list isn't even complete or correct.
Although all of the reviews were pans, there was one that I remember, which just cracked me up. It went something like: "The best thing about the clunker ARI which opened last night at the Mark Hellinger Theatre, was that the final curtain finally came down-Before midnight."
This was a humongous disaster that never should have happened. (And yet, in a review after the closing, Kenny Gaston said he'd like to remount it and try it again. Oy!) It was quite the experience.

Thank-you so much for commenting. I really appreciate your taking the time. As a theatre fan, all these behind-the-scenes stories are fascinating. I've walked through the Hellinger in its current incarnation but I didn't know that about the wall. It's a beautiful theatre.