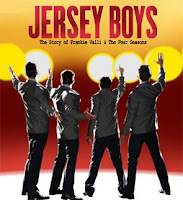 I know it's a little like baying at the moon or bringing coals to Newcastle or something but please indulge me as I express my outrage at ticket prices.

The Jersey Boys tour is coming to Boston this summer, from July 23 to Sept. 26, and I was thinking about going. Not that I would do this, but just for yuks I checked out the premium price for a Sunday matinee at the Citi Performing Arts Center's Shubert Theatre. It was $200! That's before adding in the $16.25 "service charge" and the $2 "handling fee."

Of course, no one is saying I have to spend that much. I could get a plain vanilla orchestra seat for $99 or sit in the back of the balcony for $49. I'm guessing with group discounts and the like, very few people will actually pay $200 for a ticket.

And granted, $200 is still a bargain compared with Broadway. A premium seat for Jersey Boys on the same Sunday afternoon at the August Wilson Theatre will set you back a whopping $352, not including a $7 service charge and $2.50 for handling.

Now, I'm far from a theatre snob. I see many fine Broadway shows on tour. I'm sure the performers in this production of Jersey Boys are terrific. Looking at their biographies, it seems quite a few have Broadway credits. So it's not like I'd be paying to hear four guys from the neighborhood croon some Frankie Valli & The Four Seasons tunes.

But still - $200 for the best seat on tour, when you may not be getting all the bells and whistles of a Broadway production. Am I out of line in thinking there's something wrong here?
Posted by Esther at 11:30 AM

I'm right there with you. Ticket prices are insane, and will kill Broadway. Something needs to give.

What amazes me is that the price of tickets for touring productions is rapidly approaching where Broadway used to be, which sends Broadway into the stratosphere!

$200 for a national tour? Without any stars, no less? Ridiculous!

I know, it's really unbelievable! I really wonder how many of those premium tickets they'll sell?