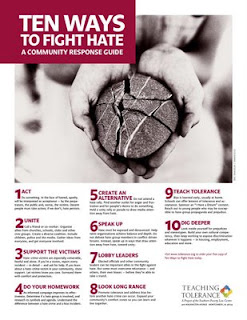 Taking part in the Yom HaShoah remembrance when I lived in Israel in 1998 was one of the most unique and unforgettable events of the year I spent there.

I was standing on the corner of a busy street in Tel Aviv when the memorial siren went off at 10 a.m. At first, I didn't realize it, because there was so much noise from the traffic.

But suddenly, everything went silent. Buses pulled over to the side of the road. Drivers got out of their cars. People walking along the street stopped in their tracks. Customers at a cafe got up from their chairs. Everyone stood at attention and bowed their heads. No one moved.

For two minutes, the only sound was the siren. It was a simple, yet profound and deeply felt act of communal memory. We stood still together and silently remembered, each person caught up in his or her own thoughts.

Some Jews have argued that standing silently isn't a very Jewish way to commemorate something. And they do have a point. We shouldn't just do that.

I didn't write anything a few weeks ago when the National Organization for Marriage released its "Gathering Storm" commercial, about the supposed dangers American society faces from legalizing same-sex marriage.

That video is disgusting and reprehensible and unAmerican. Extending equal protection hurts no one. And our gay and lesbian friends, family members, coworkers, neighbors and loved ones are not a threat to anyone.

You can read the Human Rights Campaign's statement debunking it. HRC has also set up a Web site, End the Lies, to confront the lies and distortions used to defeat LGBT equality measures.

Tomorrow, the House Judiciary Committee will take up the Local Law Enforcement Hate Crimes Prevention Act, also known as the Matthew Shepard Act. The bill would give the Justice Department the power to prosecute bias-related crimes where the victim is chosen because of their race, color, religion, national origin, gender, sexual orientation, gender identity or disability.

In The New York Times on Sunday, Frank Rich called "Gathering Storm" a turning point in the demise of America's antigay movement. "If it advances any message, it’s mainly that homophobic activism is ever more depopulated and isolated as well as brain-dead."

It may be the last gasp of the bigots but today of all days, I can't dismiss it so easily.

Whenever we present one group of people as objects of hatred and fear it becomes easier to think of them as less than human, as less deserving of equal rights. And that is the true threat to all of the values we hold dear as Americans.
Posted by Esther at 1:00 PM