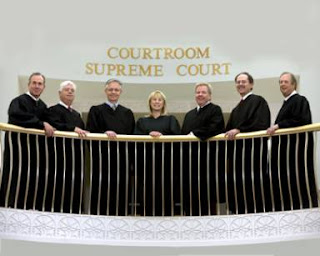 I think I'm falling a little in love with the Iowa Supreme Court. Legal opinions aren't my favorite genre but I've just read the entire 69-page decision in Varnum v. Brien, which concluded that the state's ban on same-sex marriage is unconstitutional.

"Like most Iowans, they are responsible, caring, and productive individuals. They maintain important jobs, or are retired, and are contributing, benevolent members of their communities. ... Like all Iowans, they prize their liberties and live within the borders of this state with the expectation that their rights will be maintained and protected."

Really, it's that simple, isn't it? These are not stereotypes we're talking about. They're Iowa citizens, responsible, caring people who are entitled to the same rights as everyone else. (Even if they weren't responsible and caring, they'd still be entitled to those rights.)

Cady goes about it in such a methodical way, explaining the role of the judiciary, reminding Iowans of their role as a leader in civil rights, listing the legal benefits of marriage, outlining the prejudice against gays and lesbians, describing the state's arguments for preventing them from marrying and then dismantling those arguments one by one. Even a non legal scholar like me could follow it.

In a couple of spots he even sounds a little sarcastic and incredulous about some of the state's arguments before concluding: "We are firmly convinced the exclusion of gay and lesbian people from the institution of civil marriage does not substantially further any important governmental objective."

Also, I'm impressed that it was a unanimous decision and I don't think that was a coincidence. The justices clearly understood the importance of having the court speak with a single, strong voice on a groundbreaking civil-rights case.

Students of the 1954 Brown v. Board of Education ruling know that Chief Justice Earl Warren considered it imperative to have the Supreme Court issue a unanimous ruling to strike down the doctrine of "separate but equal" that helped end legal segregation in this country.

The court's decision in Brown led to massive resistance on the part of many white Southerners, and the iconic image from 1963 of Alabama Gov. George Wallace standing at the schoolhouse door to bar the integration of public schools.

But fortunately, we've grown as a nation. I was heartened to read this statement from Iowa's Senate Majority Leader Michael Gronstal and House Speaker Pat Murphy:

“Thanks to today’s decision, Iowa continues to be a leader in guaranteeing all of our citizens’ equal rights.

“The court has ruled today that when two Iowans promise to share their lives together, state law will respect that commitment, regardless of whether the couple is gay or straight.

“When all is said and done, we believe the only lasting question about today’s events will be why it took us so long. It is a tough question to answer because treating everyone fairly is really a matter of Iowa common sense and Iowa common decency.

“Today, the Iowa Supreme Court has reaffirmed those Iowa values by ruling that gay and lesbian Iowans have all the same rights and responsibilities of citizenship as any other Iowan.

“Iowa has always been a leader in the area of civil rights.

“In 1839, the Iowa Supreme Court rejected slavery in a decision that found that a slave named Ralph became free when he stepped on Iowa soil, 26 years before the end of the Civil War decided the issue.

“In 1868, the Iowa Supreme Court ruled that racially segregated “separate but equal” schools had no place in Iowa, 85 years before the U.S. Supreme Court reached the same decision.

“In 1873, the Iowa Supreme Court ruled against racial discrimination in public accommodations, 91 years before the U.S. Supreme Court reached the same decision.

“In 1869, Iowa became the first state in the union to admit women to the practice of law.

“In the case of recognizing loving relationships between two adults, the Iowa Supreme Court is once again taking a leadership position on civil rights.

“Today, we congratulate the thousands of Iowans who now can express their love for each other and have it recognized by our laws.”

Instead of appealing to people's fears and prejudices, they appeal to their common sense and decency. They even sound proud of what the court did. Way to go, gentlemen. You are true leaders and you should be proud. Let me join you in congratulating all of the Iowans who will be getting married when the court's ruling goes into effect on April 24.
Posted by Esther at 10:30 PM

All I can say, again and again, is I'm so thankful for Iowa!

Wow, Amanda, you have the world's record for commenting on my blog posts! Thanks!

It's just such a methodical, forceful opinion, calmly and rationally debunking all of the appeals to fear and prejudice. It cuts to the core issue: equal protection under the law.

The marriage statute does not have a sexual orientation requirement.

Why did the Court emphasize sexual orientation?

Hi Chairm,
Thanks for the comment. Well, I'm not a lawyer and it probably would be better for you to just read the opinion yourself. But from what I've read, the justices seem to explain that pretty well.

Here are some pertinent sections:

If you look at pages 8-9 of the opinion, it says that the Iowa Legislature amended the state's marriage statute to define marriage only as a union between a man and a woman.

Six same-sex couples asked a county recorder to issue marriage licenses to them, and the recorder refused, following the state law. Except for the statutory restriction defining marriage as a union between a man and a woman, the couples met all of the other requirements to marry in Iowa.

In their lawsuit, they claimed that the state's action unconstitutionally discriminated against them on several bases, "including sexual orientation."

If you look at pages 30-31, the opinion says that the statute doesn't expressly forbid gay and lesbian Iowans from marrying, but it does require that if they do marry, it be to someone of the opposite sex. The court says that considering the complete context of marriage, including intimacy, that's clearly unappealing and "no right at all."

The only way a gay or lesbian person can gain the same rights under the statute as a heterosexual person is by negating the very trait that defines them as a class - "their sexual orientation."

"The benefit denied by the marriage statute — the status of civil marriage for same-sex couples—is so “closely correlated with being homosexual” as to make it apparent the law is targeted at gay and lesbian people as a class."

By placing civil marriage outside the realistic reach of gays and lesbians, the ban on same-sex marriage "differentiates implicitly on the basis of sexual orientation."

If you read through the county's arguments, which the court discusses starting on page 51, they're all about why same-sex couples (gays and lesbians) should not be allowed to marry.

So it seems pretty clear to my non-legal eyes. The law clearly targeted a class of people based on their sexual orientation.