I love this time of year, when every book and movie, TV series and CD, play and musical has the potential to be a hit.

I'll only be able to see a handful of shows in New York City and not nearly enough off Broadway. But you have to start somewhere, so here are the Broadway shows at the top of my wish list:

La Bete:
A comedy in rhyming couplets inspired by Moliere? I'm there. This is my chance to see Mark Rylance, whose Tony-winning turn in Boeing Boeing I missed. And it's been 3 1/2 years since I last saw David Hyde Pierce on Broadway, in his Tony-winning performance in Curtains. Much too long.

The Pitmen Painters:
Maybe it's because I loved How Green Was My Valley, or the fact that I've been in a coal mine, but I'm very interested in Lee Hall's play about a group of British miners in the 1930s who discover their artistic side. Hall, who wrote Billy Elliot, knows the terrain. New Yorker theatre critic John Lahr, who saw it in London, put The Pitmen Painters on his list of the 10 best plays of 2008.

Brief Encounter:
I've never seen the 1945 British movie, directed by David Lean, with a screenplay by Noel Coward. And I'm not a big Coward fan. Still, I like innovative work and this play, from Britain's Kneehigh Theatre, sounds so intriguing for the way it incorporates film footage into the action onstage. I can't even imagine what it'll be like.

The Scottsboro Boys:
The reviews from the pre-Broadway engagement at the Guthrie Theater have been glowing. It's got a score by Kander and Ebb. The cast includes John Cullum and Colman Domingo, both of whom I've enjoyed onstage. And I'm so curious to see how this shameful episode in American history is told through music.

A Free Man of Color:
I've read a little bit about the time in which John Guare's play occurs and it's fascinating. New Orleans in 1801, before the Louisiana Purchase, was a freewheeling place, where racial strictures were much less rigid. Jeffrey Wright plays the title character, whose life will be upended when the city is transferred from French to American sovereignty.

Women on the Verge of a Nervous Breakdown:
I could not be more excited about a cast - Patti LuPone and Laura Benanti, both of whom I adored in Gypsy, plus Sherie Rene Scott and Brian Stokes Mitchell, whom I've never seen. And the musical is based on a Pedro Almodovar movie that I haven't seen, so it'll all be new to me. Plus, haven't we all been on the verge of a nervous breakdown at one time or another? 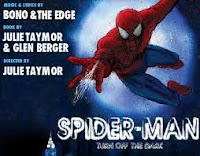 Of course there's more I'd love to see. I missed Time Stands Still with Laura Linney, so I'm hoping to catch the return engagement. And I want to see Spider-Man Turn off the Dark, but since previews don't begin until mid-November, I'll wait until they get that flying down pat.
Posted by Esther at 12:30 AM

Labels: A Free Man of Color, Brief Encounter, Broadway, La Bete, The Pitmen Painters, The Scottsboro Boys, Women on the Verge of a Nervous Breakdown

We saw Brief Encounter last night. It was entertaining and innovative and charming, although a bit slow at points. In some ways it reminded me of The 39 Steps.

Thanks, Jeff! I loved The 39 Steps, so even though Brief Encounter is a romance and not a comedy, I think I'd enjoy it just for the innovative storytelling. Had you ever seen the movie Brief Encounter? I wonder if I should watch it beforehand, like I did with The 39 Steps?

i saw both brief encounter and scottsboro boys at the guthrie (and brief encounter again on broadway last weekend). both are can't miss, but for different reasons. i don't think it's necessary to see the movie brief encounter first, but i'm kind of curious to see it now.

Thanks for the comment Jill. I have my ticket to see Brief Encounter next month and I'm really looking forward to it. Sounds like I can hold off on seeing the movie until afterward.

I'm definitely planning to see The Scottsboro Boys, too. I know there are some parts that may make me uncomfortable but I think a good work of art should do that sometimes.