I laughed my way through Alan Ayckbourn's trilogy The Norman Conquests on Broadway. So when I saw a work by the prolific British playwright on Trinity Rep's schedule, my excitement level went sky high. 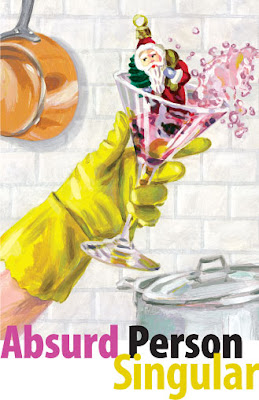 Set in the mid 1970s in London, Absurd Person Singular takes place in the kitchens of three married couples hosting Christmas Eve parties in successive years. And once again, I laughed all the way through. (If you ever get a chance to see an Ayckbourn play, take it!)

Sidney (Stephen Berenson) and Jane (Angela Brazil) are desperate to make a good impression so they can obtain a bank loan to expand their grocery store. Geoffrey (Fred Sullivan Jr.), married to the depressed Eva (Phyllis Kay), is a successful architect who boasts about his womanizing. Ronald (Timothy Crowe) and Marion (Anna Scurria) are the snobby banker and his wife.

Ayckbourn has a great knack for bringing out the absurdity in the most ordinary people and mundane events, making comedy out of situations that on the surface don't seem funny: alcoholism, depression, financial woes.

He paints a great portrait of the tension - beneath the surface and boiling over - that exists during these holiday get-togethers: the frantic preparations, the small talk, the silly party games and the person who always has too much to drink.

While I don't think there's any deep message in this play it is interesting to see the changes that occur over the three acts. Marriages are strained, the way the couples relate to each other changes, fortunes rise and fall.

One of the things I appreciated most about Absurd Person Singular is what it leaves to the audience's imagination.

There's a ferocious-sounding dog in Act II that we never see. And at a couple of points during Act I, the actors leave the stage. The only sound is the chatter of partygoers in the adjoining room.

When that happened it was surprising and kind of unsettling - I was staring at an empty set for a minute. Yet at the same time I found it kind of thrilling as I wondered what would happen next.

At the theatre, I don't think you can ask for anything better than that.
Posted by Esther at 2:30 PM

I saw this show last night and absolutely LOVED it! I, too, thought it was uproariously funny. One of the people I went with, though, thought it was depressing. Isn't it interesting how different theater goers can focus on different aspects of a play and come away with a different perspective. I, too, loved how the audience was left to imagine what was happening off stage.

On another note.. Don't you just love the art work for this season's posters? The style and the colors really appeal to me. I like them so much better than the artwork from the last couple of seasons.

Hey Pam, thanks for the comment! Yeah, it is interesting how people can see the same work from a completely different angle. Absurd Person Singular does deal with some heavy topics but the whole thing is done in such a hilarious, over-the-top way. I guess it is a little bittersweet if you think how all of the characters lives are change by the end. Some fare better than others!

Yeah, I do like the artwork. It really evokes what each play is about in a really interesting way.