Elling, at Broadway's Barrymore Theatre
Gratuitous Violins rating: *** out of ****

In the critical shorthand, Elling is a Norwegian version of The Odd Couple with a twist: two mismatched patients at a mental institution try to make a go of it as roommates in an Oslo apartment.

As the title character, Denis O'Hare is small, fastidious, nervous, fearful of venturing outside. Brendan Fraser's Kjell Bjarne is his opposite: big, with a booming voice and a bit of a slob, he's outgoing and desperately wants to meet a woman.

Helping the pair is a social worker, Frank Asli, played by Jeremy Shamos, who checks on them but also gives them the tough love they need. Jennifer Coolidge is hilarious as several characters, including the pregnant upstairs neighbor, Reidun, and Richard Easton is poignant as Alfons Jorgensen, an elderly poet who befriends them. 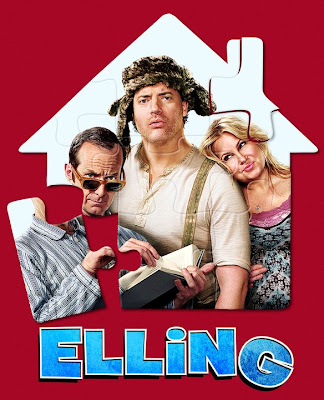 This was my first time seeing any of these actors onstage and I really enjoyed all of the performances. O'Hare and Fraser were especially great to watch. They created memorable, quirky characters without making them too cutesy or over the top.

We're never quite sure what the problems are with Elling and Kjell Bjarne. Elling seems to have had a very strong attachment to his late mother and Kjell Bjarne seems to have been "different" all his life. (From my front-row seat in the left orchestra, I saw a little more of Fraser than I'd anticipated in a scene where the two exchange underpants. But not in a bad way!)

No matter their history, the people they encounter accept them for who they are. Elling is not only about finding your way in the world, it's also about making a family - maybe not the one you were born into but one that's just as caring and loving nonetheless.

Scott Pask's scenic design is sparse - the apartment has a couple of beds, a table and chairs, an armoire. There are some nice touches, like the tiny Norwegian flags on a tiny Christmas tree. It's snappily directed by Doug Hughes. I don't know where costume designer Catherine Zuber got Kjell's hat but I love it!

Elling started out as a novel by Ingvar Ambjornsen, then became a movie and received an Oscar nomination for Best Foreign Language Film and finally, was adapted for the stage by British writer Simon Bent.

This isn't a deep play but it's sweet and it tells the story of its two main characters with humor and affection. I was so sorry to learn today that it's closing on Sunday, only a week after opening night. I wish Elling had found a bigger audience.

For me, the joy came from watching Elling and Kjell Bjarne slowly gain confidence as they interact with the outside world. At first, I was afraid I was laughing at them but really, I was rooting for them to succeed.
Posted by Esther at 2:00 PM

I saw and loved this movie and was sad to learn that the play was closed so quickly. And what a shame for all those fans coming from overseas.

Thanks, Pam. I'll definitely have to check out the movie. It wasn't the most earth-shattering play but like I said, funny and sweet.