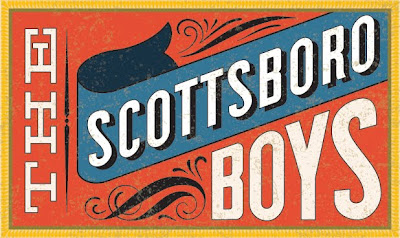 The Scottsboro Boys, at Broadway's Lyceum Theatre
Gratuitous Violins rating: **** out of ****

It's been more than 30 years but I can still remember the first time I saw a Kander and Ebb musical, the movie version of Cabaret.

There were parts of the story, set in Berlin as the Nazis are rising to power, that made me uncomfortable. But it also made me realize that a musical could explore a serious subject while still be entertaining in the best sense of the word. Cabaret was thoughtful, tuneful and powerful.

Watching The Scottsboro Boys, the final work from songwriters John Kander and the late Fred Ebb, I felt the same way. The story of nine black teenagers falsely accused of rape in Alabama in 1931 is profound, moving and immensely entertaining musical theatre.

The Scottsboro Boys is told as a minstrel show, a format in which, traditionally, white performers in blackface would mimic African-Americans. Here, minstrelsy is turned on its head: black performers imitate white characters. And it's used not to ridicule black people but to illuminate the era's racism, which it does with chilling effectiveness.

John Cullum, celebrating the 50th anniversary of his Broadway debut, is the only white cast member. Looking like Southern gentry in his white suit and top hat, he's the interlocutor, urging the nine to sing and dance.

The ensemble numbers, like "Hey, Hey, Hey, Hey," that opens the show, were rousing and the choreography by Susan Stroman, who also directed, was thrilling.

But knowing what they represented, it made me uneasy to applaud. These were people being forced to "put on a show." And I think that was the point. The minstrel show, as hard as it was to watch sometimes, demonstrated how black men were viewed - as buffoonish objects of entertainment for white audiences.

Still, there's an important distinction in The Scottsboro Boys between how the nine are depicted when they're "performing" and how we see them when they're alone, in jail. (Beowulf Borritt's very simple set uses planks and silver-painted chairs to form cells, a courthouse and a train.)

Book writer David Thompson makes them far from stereotypes as their case winds its way through the legal system. He treats them as individuals and their stories with dignity and compassion. We learn about their lives, their hopes and fears, in a way that I found compelling.

The Scottsboro Boys focuses on Hayward Patterson, played by a spellbinding Joshua Henry. He's a proud, defiant man who won't be cowed into pleading guilty to something he didn't do. When he sang the gorgeous ballad "Go Back Home," it took my breath away.

But to me, the most heartbreaking was the youngest, Eugene Williams, portrayed with astonishing self-assurance by 12-year-old Jeremy Gumbs. His tap dance to the song "Electric Chair" was searing and nightmarish.

As Mr. Bones and Mr. Tambo, Colman Domingo and Forrest McClendon play the white characters - sheriff, guards, lawyers, the attorney general - with outrageous, hilarious exaggeration. Likewise, Christian Dante White and James T. Lane are terrific in dual roles as two of the nine - and as their female accusers.

McClendon has a memorable turn as Samuel Leibowitz, the Jewish lawyer from New York who was a tireless advocate for the Scottsboro Boys. He's wonderful in "That's Not the Way We Do Things," which cleverly points out the sometimes patronizing attitudes of Northern white liberals. (Speaking as a Northern white liberal myself, it made me chuckle.)

And just as the musical shines a light on racism, it also exposes the era's anti-Semitism. In "Financial Advice," there's a derisive reference to Jewish money paying for the defense of the Scottsboro Boys. Hard to hear, yes, but historically accurate and reflective of how Jews were viewed by white Southerners.

What The Scottsboro Boys did so well was remind me that the struggle for civil rights in this country occurred from the bottom up, sparked by ordinary black men and women who had simply had enough.

These were poor people, arrested while riding the rails to look for work in the middle of the Depression. Some of them couldn't read or write. But as the musical reveals, they left a legacy - one that stunned me and left me incredibly moved.

The Scottsboro Boys is a thoughtful, tuneful and powerful American story.
Posted by Esther at 8:00 PM

Thank-you for the kind words. I really hope this finds an audience. It's such a powerful, well-told story with a great cast.