Mauritius at the Gamm Theatre
Gratuitous Violins rating: *** out of ****

In Mauritius, playwright Theresa Rebeck puts a contemporary spin on a timeless literary theme - the search for a legendary object of great significance and value.

Half-sisters Jackie and Mary, whose mother has just died, are fighting over a family heirloom: an album that holds a pair of rare 18th-century postage stamps from the island of Mauritius, a former British colony in the Indian Ocean. Flaws in the stamps make them even more valuable. 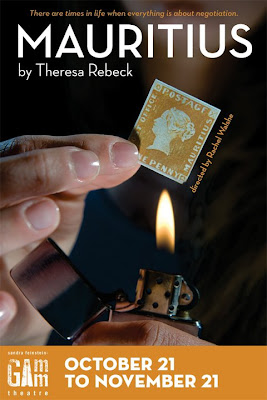 Amanda Ruggiero's Jackie, their mother's caregiver, says the stamps were left to her. Casey Seymour Kim's Mary, who left home as a teenager years ago and never returned, maintains that because the stamps were part of her paternal grandfather's collection, they are part of her inheritance.

Left with a pile of bills, Jackie is desperate to sell the stamps and make a fresh start. Mary, facing Jackie's accusations of abandonment, is defensive and rather uptight. Where Jackie is diffident, Mary is brassy - almost to the point of being grating.

Jackie feels she's owed the stamps as payment for everything she's put up with. To Mary, who knows their history and spent hours poring over them as a child, they're a link to her beloved grandfather.

But they're not the only ones who covet the stamps.

There's Jim O'Brien's Phil, owner of a rundown stamp store who can't be bothered to examine Jackie's album - it's not "Antiques Roadshow," he tells her dismissively; his thuggish friend Dennis, played by Steve Kidd, does look and hatches a plan to sell the stamps to Richard Donelly, a businessman whose hardened exterior melts when he sees them.

What I loved about Mauritius is that it's terrifically suspenseful. There were plot twists that took me by surprise. I was riveted, wondering what would happen next. And it was fascinating to watch Ruggiero's Jackie transform from an insecure young woman, unsure of what she has, to a tough negotiator.

Still, as much as I enjoyed the play, there were a few things about Mauritius that bothered me.

When someone comes into Phil's store with a weathered album, wouldn't he at least look at it? And once Jackie realizes the value of what she has, why doesn't she put the album in a safe-deposit box instead of carrying it around everywhere, clutched tightly to her chest? I chalked it up to her innocence - and grief.

More importantly, I felt like Rebeck was teasing the audience a bit with what she reveals and doesn't reveal about the characters' histories. In the end, that frustrated me more than anything.

We never learn what forced Mary to leave home and why she stayed away, although Rebeck hints a few times that she's going to tell us. Dennis has a tantalizing line alluding to how Mary's grandfather might have come into possession of the stamps but it never goes anywhere. Likewise, something happened long ago between Phil and Sterling that remains unexplained.

But maybe the back stories don't really matter. Perhaps the stamps - sought after for different reasons - are the most important characters.

Reviewing the play in the New Yorker during its 2007 Broadway run, John Lahr called Mauritius as "Mamet for girls." And it does remind me of Mamet - the profanity, the rapid-fire, overlapping dialogue, people in desperate situations, the deal-making and everyone trying to get the upper hand.

I thought of another comparison: The Maltese Falcon. What Sam Spade says in the movie about the statue you could also say about the two square-shaped slips of paper at the heart of Mauritius. They are "the stuff that dreams are made of."
Posted by Esther at 11:30 AM