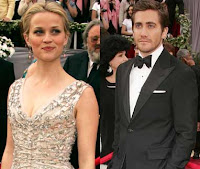 It's hard sometimes to keep up with all of the articles at Playbill.com, so I'm glad that Theatre Aficionado at Large wrote about this absolutely outrageous incident. Apparently, last spring Jake Gyllenhaal and Reese Witherspoon were spotted text-messaging during a performance of August: Osage County.

March 6, 2008 -- ARE overly-cute lovebirds Jake Gyllenhaal and Reese Witherspoon really that busy? An audience member at the Sunday matinee of "August Osage County" looked on in shock as the usually cuddly couple kept their heads down "texting on their BlackBerrys the entire time." It was probably good they "snuck out" at intermission - we're told the other Broadway theatergoers were "much more interested in watching them than the stage."

When it comes to distracting behavior at the theatre, I'm willing to cut the average person some slack. Anyone can forget to turn off their cell phone. Yes, it's disruptive. Yes, in a perfect world, we'd all double-check to make sure our phones are off before the show starts. But we're only human and we make mistakes.

On the other hand, this, well, it's beyond the pale. What possible reason could they have had for text-messaging throughout the play? This isn't passively receiving a call because you forgot to shut off your phone, this is actively engaging in disruptive and rude behavior. If you want to multitask, stay home and do it on the couch in the privacy of your own living room!

In the Playbill article, Susan Martin of the Nederlander Organization, notes that the bright light makes it very annoying to sit next to someone while they're text-messaging. And John Loiacono, house manager at Disney's New Amsterdam Theatre, the home of Mary Poppins, says that while the preshow announcement reminding people to turn off their cell phones doesn't specifically mention text-messaging, that may change.

Now really, is that something you should even have to say? Shouldn't it be obvious? You want to go to the theatre, sit there and enjoy the show. You want to talk on the phone or text-message, go somewhere else!

Reese Witherspoon is 32 years old and Jake Gyllenhaal is 27. We're not talking about a pair of giggly teenagers here. These are adults. Let's put aside for a moment the fact that they're being distracting to everyone around them. Witherspoon and Gyllenhaal are also professional actors - just like the people on stage. It is rude beyond belief for the two of them to be so disrespectful to their colleagues - their fellow actors - who, I'm sure, don't make a fraction of what they earn. It shows how little regard they have for their craft.

There are only two explanations: either the New York Post got it wrong, which is entirely possible. Or, when you achieve a certain level of celebrity apparently you believe that the rules of civilized behavior no longer apply - you can act any way you want in public. I hope it's the former, but I fear that it's the latter.
Posted by Esther at 12:19 AM