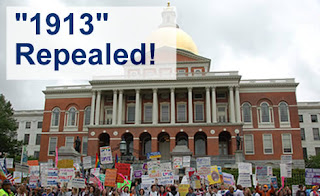 Massachusetts Gov. Deval Patrick today signed a bill repealing a 1913 law that had been used to prevent out-of-state gay couples from marrying in Massachusetts.

At the signing ceremony, the governor said repealing the law, which was originally designed to deter interracial marriages, shows that "equal means equal" in Massachusetts. Simple, eloquent and to the point. Really, I couldn't have said it any better myself.

He also took note that it's been five years since a ruling by the state's highest court that paved the way for same-sex marriage a year later.

"In five years now ... the sky has not fallen, the earth has not opened to swallow us all up, and more to the point, thousands and thousands of good people — contributing members of our society — are able to make free decisions about their personal future, and we ought to seek to affirm that every chance we can."

From the Battles of Lexington and Concord that signaled the start of the Revolutionary War, to the abolitionist movement of the 19th century that helped end slavery, Massachusetts has always been at the forefront of the struggle for liberty and equality. I'm thrilled that today, the state adds another chapter to that illustrious history.

The repeal takes place immediately, so if you're coming in from out of state to tie the knot in Massachusetts - mazal tov! Here are a few places to help you start planning your wedding.
Posted by Esther at 3:19 PM