Little House on the Internet 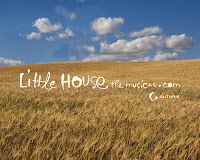 The Guthrie Theater in Minneapolis now has a Web site for its new musical Little House on the Prairie, which runs from July 26 to Oct. 5. There are activities for children (or for the kid in you), links to information about author Laura Ingalls Wilder, biographies of the cast and creative team, a short video, and more.

According to Variety, the first-day sale for Little House tickets, on June 26, shattered box-office records for the Guthrie. Nearly 5,500 tickets were sold — surpassing the previous record of 3,639 for last year's stint of the Royal Shakespeare Company’s production of King Lear, starring Ian McKellen. (Here's a report from the Guthrie blog on what it was like at the theatre that day).

For me, this is one of the most positive aspects of that record: according to the Minneapolis Star-Tribune, 58 percent of the ticket buyers on that first day had never attended a show at the Guthrie. Ticket sales came from 25 states and several Canadian provinces. Obviously, a lot of people besides me are very excited about this show.

"We knew that the 'Little House' stories resonate in this region in a profound way," said Guthrie director Joe Dowling in a statement. "And now we know that 'Little House on the Prairie' as a musical -- a truly American art form -- speaks to people across the nation in a powerful way."

As much as I've been looking forward to this musical ever since I read about it, even I was a little surprised about the big demand for tickets. I mean, we're in the middle of a recession, with gas prices over $4 a gallon.

Also in the Star-Tribune, Jill Burcum writes about that enduring appeal. She says that Laura Ingalls Wilder's "celebration of ordinary girls in ordinary places made her a childhood friend -- one we may not have thought of in a while, but one long overdue for a celebration like the Guthrie's."

I'll be one of those people attending their first show at the Guthrie and I'm incredibly excited. It's supposed to be a beautiful theatre, with a breathtaking view of the Mississippi River, which I've never seen. In fact, I haven't spent much time at all in the Midwest. (I'm not sure if a weekend in suburban Detroit and a day in Columbus, Ohio count).

Best of all, while I'm in the Twin Cities, I'll be the guest of two wonderful friends - Steve on Broadway and his true love. A great adventure, a great theatre, great friends. Really, it doesn't get any better.
Posted by Esther at 12:34 AM

Oh cool! Have fun in Minnesota!

Little House on the Prarie (the books more than the series) is very near and dear to my heart. I hope they don't bugger it up!

Have fun in Minnesota and please report back!

Thanks Vance, thanks Roxie! I'm not going for a couple of months but I will definitely report back - maybe even Sarah-style, with pictures!

I agree about the Little House books versus the tv series, Roxie. Nothing beats reading the books. I feel the same way with the Harry Potter series.