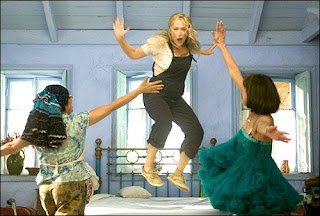 Okay, I've got to say this up front: I really enjoyed Mamma Mia! It's not a great work of art, but hey, that's not the point for me. I went to be entertained and stay cool on a hot day. And Mamma Mia!, with those very catchy Abba songs, in a movie theatre with the air conditioning cranked way up, definitely fit the bill - on both counts.

Plus, Meryl Streep is my dancing queen. She does a split, slides down a railing and leads a Greek chorus (of real Greeks!) singing and dancing along a path to the sea, to the tune of the title song. The woman turned 59 last month and she's amazing.

I saw Mamma Mia! on Broadway last summer and I thought it was great fun, with lots of humor and moments of real poignancy. The Abba craze must have passed me by, because I wasn't all that familiar with the songs. But they're very addictive. My foot was tapping pretty much the entire time.

It's true, there's not a lot of dramatic tension, and the show's paper-thin plot becomes even thinner on the big screen. But somehow, by actually showing us the picturesque Greek island where the story takes place, Mamma Mia! the movie takes on more of a dreamy, fantasy-like quality than the stage version. So what if it doesn't make complete sense?

Streep plays former pop singer Donna Sheridan, a hotel owner who's raised her daughter Sophie by herself and pretty much given up on love. Sophie (a very sweet Amanda Seyfried), is about to get married to Sky (Dominic Cooper, whose main job when he's on screen is to be awfully cute). She invites three of her mother's former lovers, the suave architect Sam (Pierce Brosnan), button-down banker Harry (Colin Firth) and rugged adventurer Bill (Stellan Skarsgard) to the wedding, in hopes of figuring out which one is her father. Christine Baranski and Julie Walters add great comic touches as Streep's ex-bandmates. Lots of hilarity, singing and dancing ensues.

As much as I liked the movie, I did miss the energy level that you only get from being in a packed house and watching the performers live on stage. You simply don't feel as connected in a movie theatre, where the performers are on a giant screen, larger than life. It's more difficult to totally lose yourself in the action. Still, it was great to hear the songs performed in a vibrant surround sound, and my foot was tapping again.

I loved the way the big musical numbers, like "Mamma Mia," "Money, Money, Money" and "Does Your Mother Know," were staged. Yeah, they were kind of silly, but they got my adrenaline rushing. Just like I did when I saw the show on Broadway, I got a little teary at Seyfried's "I Have A Dream." On the other hand, Brosnan doesn't really have a great voice, which must be why director Phyllida Lloyd had the background music turned up really loud when he was singing.

And I thought some of the shots were gorgeous, like the lighted, winding path up to a church perched on a cliff for the wedding scene, and the way Streep is framed with the sea in the background during "The Winner Takes It All." She's achingly beautiful at that moment and I think she does a great job with the song.

In a summer of animated movies and superhero movies and action movies, it's nice to have a movie for those of us who move to the beat of a different cinematic drummer. My audience was a mix of ages, with lots of young girls. People were laughing and clapping and enjoying themselves. I was pretty much smiling the whole time.

I'm sure I'll be getting my very own copy of Mamma Mia! when it comes out on dvd. On a snowy winter evening or another hot summer day, I'll pop it in the dvd player, fast forward to my favorite parts, and smile again. Maybe, in the privacy of my own home, I'll even sing along. Sadly, I will not be doing a split.
Posted by Esther at 12:17 AM

Hi Kari,
Yeah, I'd like to see it again on the big screen. You don't get quite the same level of energy that you do seeing it on stage in a packed theater, but the movie has kind of a fantasy quality that comes through, and it's so much fun and the music sounds great. I've been listening to the soundtrack a lot while driving to work, exercising, doing errands. There's just something so relentlessly catchy about ABBA's songs.

this is one of the only plays i've ever seen, which ended up being great... it's funny to think of ol' Pierce taking a stab at singing, yeeesh