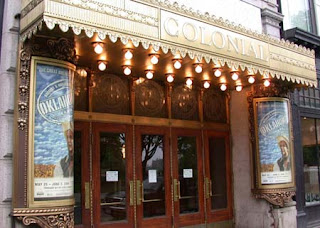 What's happing to Boston as a tryout town for Broadway musicals?

I can't get to New York City nearly as often as I'd like, so I was really excited when I found out that two musicals - the Rob Ashford-helmed Brigadoon and Nice Work if You Can Get It, with Harry Connick Jr., were going to play at Boston's Colonial Theatre before heading to Broadway. That's only an hour away from me.

Well, last week it was announced that the Gershwin-themed Nice Work if You Can Get It is on hold because all of the elements couldn't be put together after director-choreographer Kathleen Marshall left the project. And this week, Brigadoon has been postponed, according to Playbill, because of "the lack of an appropriate Broadway theatre in spring 2009."

I realize that the fate of those two shows had nothing to do with choosing Boston as their tryout city. (At least I don't think it did). Still, it's frustrating, especially when other cities don't seem to have a problem attracting Broadway-bound musicals.

Seattle is getting Shrek, and last year, it had Young Frankenstein. (Oops, I mean The New Mel Brooks Musical Young Frankenstein. Sorry, Mel!) Before that, Hairspray had its out-of-town tryout in Seattle, and Wicked's was in San Francisco. San Diego got the tryout of A Catered Affair. I could go on.

Of course, before air travel, Boston was a favorite Broadway tryout city, along with other places along the East Coast that were only a train ride or a short drive away, like New Haven, Conn., Philadelphia and Baltimore. The list of musicals that premiered at the Colonial Theatre includes Oklahoma!, Carousel, Annie Get Your Gun, Porgy and Bess and La Cage aux Folles.

So what happened? Is it the desire for a little fun in the sun before the rigors of Broadway? I've been to San Francisco in the summer and let me tell you, while I absolutely love the city and I could ride the cable cars forever, it can get a little chilly there, even in August.

I assume that the migration to the West Coast was designed, in part, to get as far from New York City as possible, allowing a show to be fine-tuned away from the prying eyes of critics. But really, when you can find a review of a show on the Internet within hours after the conclusion of its final dress rehearsal (never mind first preview!) that distance is largely irrelevant.

In addition, I'm betting that production costs are lower in places like Seattle, San Francisco and San Diego than in the Northeast. I'm sure that plays into the producers' decision about where to stage the tryout.

I don't begrudge my fellow theatre fans on the West Coast the thrill of seeing a show with its original Broadway cast. I realize that most of those fans will never make it to New York City to see the musical on Broadway. I just want the producers to spread the joy around.

Hey, I know it's not a lost cause. After all, Boston still gets some tryouts. There was the late and mostly unlamented High Fidelity, which started at the Colonial Theatre in September 2006 and moved to Broadway, where it closed 10 days after it opened. But you can't blame that on Boston, can you?

And we gave a good sendoff to The 39 Steps, which I saw, and loved, during its pre-Broadway stint last fall at the Huntington Theatre Company. Okay, the show started in England, so Boston didn't have a world premiere. But the play is still running in New York, at the Cort Theatre.

Still, in terms of Broadway-bound musicals, it's wait 'til next year.
Posted by Esther at 9:37 AM

Not sure if you recall, but at least you got to "see" the Colonial in a recent Broadway show as Curtains used the Colonial as the venue for its musical within a musical.

Well, what about Toronto too? Ha! We got Show Boat, Ragtime, Kiss of the Spider Woman at one time. the North American premieres of Mamma Mia and uh... We Will rock You and Dirty Dancing?

I guess having the dollar on par now doesn't make us as a cheaper option anymore. darnit! good for me visiting you guys, but not so great for bringing in try out productions!

G'day Steve!
Gosh, I forgot about "Curtains." You're right - I have "seen" a tryout at the Colonial! And I should have mentioned that I saw "Sweeney Todd" on tour there last fall. It's a beautiful theatre, with such a long and storied history of launching Broadway shows.

Hey Vance,
Wow, I didn't realize all of those shows had their tryouts in Toronto, or about "Mamma Mia!" That's so sad about "Billy Elliot" too. I wonder why they decided to skip a Toronto run? Do you think the stage setup was too costly? I gather it requires some elaborate engineering or something.

I guess there's a lot of competition these days in terms of who gets what. I don't mind spreading the love around, it's just that I was really looking forward to both of those shows coming to Boston, and having both of them fall through is such a disappointment.

My guess is that they realized that Billy Elliot is such a sure fire hit that they dont need a tryout and London was enough (which basically is true. I'm wondering why it even took this long to begin with. It's going to be a SMASH!)

We were supposed to get the Ha'Penny Bridge on its possible journey to Broadway but that apparently got cancelled too. And now word is the already announced Boys in the Photograph (a reworking of The Beautiful Game apparently) from Lloyd Webber is going to be cancelled too.... what's with all these cancellations? (though Boys is actually going to tryout in Winnipeg first apparently now. That's a new one.)