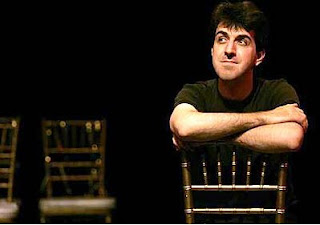 Composer Jason Robert Brown doesn't need an introduction to most musical theatre fans, but he did for me. He was one of those people whose name I kept reading about a year ago, but I didn't know anything about him.

Then in February 2007, I spotted an interview with Brown on the Jewish literature and culture site Nextbook. I thought, "Hey, this is the guy whose name I've been hearing." I read it and suddenly, I knew a lot about Jason Robert Brown!

Since then, I've listened to The Last Five Years and liked it a lot for its mixture of tenderness and self-deprecating humor - and its unusual structure - as it chronicles a failed marriage. Last year in Boston I saw Parade, about the murder of Mary Phagan in 1913 in Atlanta, and the subsequent trial and lynching of Leo Frank. I thought Brown's music, especially "The Old Red Hills of Home," was hauntingly beautiful. He received the Tony award for Best Score in 1999 for Parade.

Tickets go on sale today for the Brown's newest musical, 13, which begins previews Sept. 16 at Broadway's Jacobs Theatre. The show, which has an all-teenage cast, is about all of the anxieties that come with reaching that age. The main character is a Jewish kid from New York who's forced to move to a small town in Indiana where, apparently, there are no Jews. So I've decided to call it the "gefilte fish out of water musical."

With the new show coming up, I figure it's a good time to share that interview from last year. The article was written by Mollie Wilson, who also blogs about the theatre at Restricted View. It provides a pretty thorough look at Brown's life and career, from his 1995 off-Broadway revue Songs for a New World, through Parade and The Last Five Years, to the disappointment of Urban Cowboy and Brown's relocation to Southern California.

Along the way, Wilson includes kind of a running commentary from Brown. She begins and ends with 13, which had its premiere in Los Angeles last year. "There is a huge demographic of kids that age who love musicals," Brown says. "I wanted to create something that they could feel like they owned."

I also like to check out Brown's own Web site every once in awhile. It's a great resource, full of detailed information about all of his work and it has MP3s available for download. Brown also writes a blog, and his latest entry - The Perils of an Online LIfe - is a very funny story about reaching his limit of "friends" on Facebook.

The limit is 5,000, which would be more than enough for me, but apparently JRB gets requests all the time from people who want to be his friends. As he says, "Five thousand is a lot of people. And I don't even like people." (I'm sure he's just joking, right?) So he's been forced to throw some of his old "friends" overboard (people whose last names start with the letter "A") to make room for new ones.

I guess I'm not much of a joiner. I'm not on Facebook or Myspace or Friendster or digg or del.icio.us or Linked.in or MyBlogLog or StumbleUpon or any other social-netorking site. Am I leaving anything out? Am I missing anything? Do you think Jason Robert Brown would have me as his friend?
Posted by Esther at 12:03 AM

Of COURSE I'd have you as a friend, Esther!

I really enjoyed what I have heard from the Last Five Years (but haven't had the pleasure of seeing it). I also have heard some of the music from 13 and it is fun and energetic. I would love to see it.

Yeah, I haven't seen The Last Five Years either, although I've listened to it, and I know the setup - the husband and wife each tell the story from opposite ends of their relationship. And I agree, 13 does sound like fun. Between this and Billy Elliot, it'll be kids night on Broadway every night this fall!