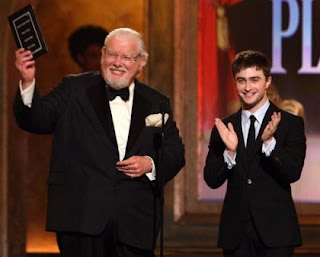 I loved the Harry Potter books but I've never been all that crazy about the movies. It's nothing personal, they're not bad movies. I just get more out of the books - they're richer, more detailed. And I'm not a huge Daniel Radcliffe fan. I feel bad saying this, because he was just a kid the first time I saw him on screen, but his performance always seemed a bit bland.

But I saw an interview with Radcliffe on Theater Talk and I was so impressed with what he had to say as he discussed preparing for his role in Equus, first in London and now on Broadway. At the tender age of 19, he just struck me as a very thoughtful young man who obviously takes his craft seriously.

And I loved what he said when Michael Riedel of the New York Post asked him what he'd learned from his Equus costar Richard Griffiths. Radcliffe responded that the main thing he'd learned was the importance of keeping his performance fresh.

"Someone asked me, How do you make it fresh every night? Well, I said, you just remember that people are paying exorbitant amounts of money to come and see you and it has to be the first time you've done it for them. If I change a line reading or whatever on stage, Richard is quick enough and listens so brilliantly that he will just go with it and be able to use it to make the scene fresh. So that's the main thing I've learned, just about keeping the play as sort of a living thing, not just rest on your laurels."

Radcliffe was 12 when Harry Potter and the Sorcerer's Stone came out in 2001. While the interview has made me even more excited about seeing his Broadway debut, part of me thinks it'll feel a little weird to see him in an adult role. Even though I've watched him grow up over the course of the Harry Potter films, I still have that mental picture of him as a little boy.
Posted by Esther at 12:29 AM

I've got to agree with you - the acting in the HP movies isn't the best. I wonder how much of that involves the script, though, because some very good actors who have appeared on there dont' seem to fare much better than the kids. When #5 came out, and the script was written by someone totally new, I thought it was far more impressive and all of the actors did a thousand times better. It was my favorite by far of the movies.

Either way, though, the books are completely superior.