It's alive - until January 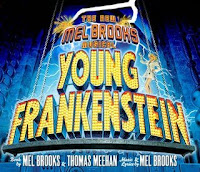 It's another depressing day for Broadway. You can add Young Frankenstein to the rapidly expanding list of shows that have posted closing notices. Whatever you think of Young Frankenstein (and I was among those who felt let down), this is the latest in a sad trend.

According to an Associated Press story, producer Robert F.X. Sillerman announced today that the musical, which opened on Nov. 8, 2007, will shutter on Jan. 4, after nearly 500 performances.

In this Playbill article, Sillerman says - no surprise - it's the economy, and that a national tour will begin next September. Of course, Young Frankenstein, alone among Broadway shows, declined to report how much money it was taking in every week and how many seats were being filled. (Which it had every right to do, I might add - it's a tradition, not a requirement, to report weekly grosses.)

After the success of The Producers, which ran for six years on Broadway, Young Frankenstein was one of last season's most highly anticipated shows. And as a big fan of the 1974 Mel Brooks movie, it was at the top of my list. It was also one of the most talked about even before it opened for, among other things, its $450 premium seats. But when I saw it, for a lot less than that, I was a bit disappointed.

For me, Young Frankenstein worked as a movie because it was a satire. Transylvania was a foreboding place. The musical tries to recreate some of that, with the design of Frankenstein's castle and laboratory. But overall, the tone struck me as a little too sunny and bright for a send-up of a horror movie.

Sure, it's a faithful adaptation - all of the funniest lines and scenes are there. Still, something felt off. I wasn't laughing as much as everyone else in the audience. (And I have to admit that everyone else seemed to be eating it up.) The production seemed to get lost in the cavernous Hilton Theatre. And I didn't find Roger Bart very engaging as Dr. Frederick Frankenstein.

But there were some things I enjoyed - Christopher Fitzgerald as Igor (who earned a Tony nomination and played his last performance in the show today) and Andrea Martin as Frau Blucher especially. I liked the "Roll in the Hay" number on the ride to Frankenstein's castle, with Bart, Fitzgerald and Sutton Foster as Inga; and "Puttin on the Ritz," with Shuler Hensley as the monster. And I'll probably give it another chance on tour.

Fitzgerald is an actor I'm looking forward to seeing again. According to an item on the Web site of actor and musician Kevin Cahoon, he'll join Cahoon in the musical Minsky's, set in Prohibition-era New York, which will premiere at the Ahmanson Theatre in Los Angeles beginning Jan. 21.

But I have to wonder whether we'll see Mel Brooks again on Broadway.
Posted by Esther at 6:20 PM

I saw the Encores production of "On the Town" this past week, and Andrea Martin was a standout. She was HY. STE. RI. CAL. She played the drunken tutor of Miss Turnstiles.

It was actually a terrific production in general.

Yup, just saw On the Town too and was AMAZING!!!

But Im not really sad about Young Frank. I was totally disappointed too and felt like everyone on stage was being wasted (though now Sutton Foster is being wasted in Shrek... this is becoming a bad trend).

I've been reading all the raves for "On the Town." I'm so jealous of both of you! "Young Frankenstein" was my first time seeing Andrea Martin on stage but I loved her from "My Big, Fat Greek Wedding."

And Vance, I agree with you about Sutton Foster being wasted in both shows. But I'll have more to say about "Shrek" when I finally get to my review!