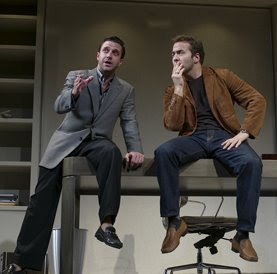 I love this description of Raul Esparza in Jeremy McCarter's Newsweek essay about the key to interpreting David Mamet's language. Esparza's performance as Hollywood producer Charlie Fox in Speed-the-Plow was my first time seeing him on stage and he was riveting, especially in the play's final scene.

"Vocal limitations also hamper the revival of Speed-the-Plow, Mamet's comedy about a producer and an office temp trying to persuade a movie executive to make two different films. Though Jeremy Piven (Ari Gold on Entourage) and Elisabeth Moss (Peggy on Mad Men) have done plenty of stage work, their performances as the executive and the temp come off like those in American Buffalo: clear and poised but lacking the lyrical flash that Mamet demands. Why, then, does the show thrive?

Listen closely to Raul Esparza. The young star of musical theater all but sings the role of the craven producer, flickering from deadpan comic understatement to high, excited shrieks. He brings to Mametspeak the verbal flair you'd expect from an actor who spent the past two years slaloming through the rhythms of Sondheim and Pinter."

Lovely! I think this kind of vocal dexterity is one big reason film & TV actors (tend to) fail to distinguish themselves on stage. It's also one of the main reasons Jennifer Aniston will never be a movie star (i.e., it matters on film, too).

Whenever friends or coworkers ask who and what I'm going to see on Broadway, I always mention the names they might recognize from tv or the movies. But the actors I love the most end up being the ones who are primarily stage actors - like Raul Esparza.