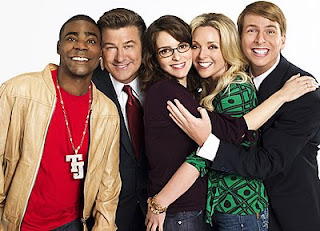 One of my favorite tv shows, 30 Rock, returned this week. Yay! I definitely need some more humor in my life.

The season opener did not disappoint, even though it seemed like the writers were trying to cram an awful lot into a little over 20 minutes. Tina Fey, who certainly has helped make Saturday Night Live must-see tv again this fall, was at the top of her game.

There were some great lines and two hilarious plot strands: Fey's Liz Lemon desperately trying to impress adoption agency representative Megan Mullally, and Alec Baldwin's Jack Donaghy clawing his way back up from the mailroom to the executive suite.

As an extra special bonus, one of my blogging buddies, Kari from Persistent Cookie, has a new gig as the 30 Rock correspondent for Give Me My Remote. It'll be fun having someone to discuss the show with every week. And, we've got Oprah appearing on what I know will be a very special episode. Can it get any better?

In the New York Times, Alessandra Stanley calls 30 Rock a "clever update, not to say rip-off" of The Mary Tyler Moore Show. (And she means that as a compliment, I think!) I can see the parallels: single woman trying to make a career behind the scenes in television, surrounded by a demanding boss and quirky coworkers.

Of course, Tracy Morgan is the vain and self-absorbed Ted Baxter character played by Ted Knight, and Alec Baldwin would be the counterpart to Ed Asner's brusque but kindhearted Lou Grant. But who's Gavin MacLeod's understanding confidante Murray?
Posted by Esther at 2:01 PM

I have hesitated to add 30 Rock to my viewing schedule. Everyone I know that watches it says it is right up my alley. So I figured I would just be addicted to another show. I couldn't resist watching Thursday's premiere and it sucked me right in. I am afraid I won't be able to stop now! But I do like to give my viewership to worthy shows, and I don't think one could argue about 30 Rock being worthy! Now I'll have to start from the beginning...

Count me in as a "30 Rock" addict. I've had the "MTM Show" talk with friends as well. I've pegged Scott Adsit's Pete as the updated version of Murray. Also, my commentary included that Jenna was a combination Rhoda & Phyllis (with that insecurity juxtaposed with intense narcissism tied up in the best friend).

It was a great season opener and I'm really excited to see where they'll be going this year.

Hey Linz, I'm so glad you started watching. Ratings haven't been spectacular, and 30 Rock needs you! While I've loved it from the beginning, I actually think last year was better than the first season and I'm expecting continued improvement, with the show getting even sharper, funnier, more clever. So please stay tuned!

Yeah, I think you're right about Pete being Murray. Although in the MTM show, Mary and Murray were pretty much on the same level, whereas Liz is Pete's boss. And I never thought about Jenna as a Rhoda/Phyllis combo!