Please indulge me as I take off my theatre geek hat and put on my history and politics geek hat.

Campaign buttons are one of my favorite parts of the political process - right up there with watching the roll call of the states at the nominating conventions and waiting for the returns to come in on election night.

There are lots of ways to go about a campaign button - simple and to the point or more indirect and using a bit of humor. Whichever approach is chosen, buttons are at the intersection of history, politics and pop culture. They can tell us quite a bit about where we've been as a country and where we are today.

Here's an opinion piece, "People of the Button," that ran last month in the New York Times. Rabbi Peter Schweitzer amassed a collection of presidential campaign buttons that were designed to appeal to Jewish voters. The buttons are now at the National Museum of American Jewish History, in Philadelphia. There's also a short slide show of some of the items in Schweitzer's collection.

The Wilkie button is one of those with a hidden meaning. If you were a Jewish voter in 1940, you probably realized Wendell Wilkie's last name was written in Hebrew-style script. If you weren't Jewish well, you probably wouldn't think about it at all. Schweitzer says this seems to be the first use of Hebrew calligraphy to communicate a political allegiance. But the button didn't help the Republican Wilkie against incumbent Democrat Franklin D. Roosevelt. He only garnered about 10 percent of the Jewish vote. 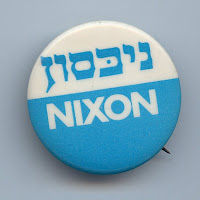 By the 1970s, things had changed in America and for campaign buttons. The melting pot went out the window and we were embracing our diversity. It was no longer unheard of for members of a group to boldly and unequivocally express their support for a political candidate. This one is pretty typical - it has Nixon's name in English as well as Hebrew. (Remember to read the Hebrew from right to left, people!)

The McCain and Obama buttons in Schweitzer's collection couldn't be more different - which makes them kind of interesting. I'm not saying one approach is better than the other - they're just different.

The McCain button is straightforward and to the point - and it's entirely in English, which makes it immediately understandable and accessible by everyone. Plus, the emphasis is on "Jewish Americans" and not simply "Jews." 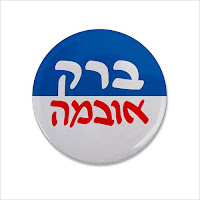 On the other hand, the Obama button, perhaps aiming to be a bit humorous, is entirely in Hebrew. But it might be too much of an inside joke. Whereas the Wilkie button worked on two levels - even if you weren't Jewish, you got the point - this one requires that you're at least able to recognize those are Hebrew letters.

Ironically, a generation ago, more Jews would have been able to read the Obama button than today. (Like your bubbe and zayde in Florida, for example. Hmmm, maybe it is for them?)

Of course, the button could be designed as a conversation starter, which isn't a bad idea either.

So, happy voting and please, if you're in California, vote "no" on Proposition 8, to ensure that all Americans are treated equally and all families enjoy the same protections. This is a historic day in the long and difficult struggle for civil rights. It's a day to go forward - for all Americans.
Posted by Esther at 1:08 AM

I'm going to be on the edge of my seat watching the CA race tonight. I hope the results are clear before I fall asleep on the couch. I'm not good at staying up late.

I'm with you, Amanda! I want this to be a night in which we advance the cause of civil rights and equality for all Americans. But unfortunately, I think it's going to be very close and we probably won't know the results until Wednesday.