While I still have a few more theatre reviews to post, I wanted to mention some of the other places I visited and things I saw during my week in New York City. Manhattan is such a wonderful place to explore on foot (and by subway, when I'm too exhausted to walk anymore.) 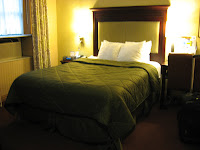 First, I stayed in Times Square, as I usually do. Because I was going to be in New York for seven nights, I wanted something a little cheaper than my previous hotels. Sarah, from Adventures in the Endless Pursuit of Entertainment, recommended the Comfort Inn on West 46th Street, literally a stone's throw from Times Square, and it was perfect. Plus, I had free Internet access and free continental breakfast!

Then, following one of Sarah's expertly designed tours, I spent a day exploring Lower Manhattan, taking the Number 1 subway downtown, from Times Square to South Ferry (being careful to ride in the first or second car) and then working my way back up along Broadway, through the Financial District, Chinatown and Little Italy to the Lower East Side, where I took the subway back to Times Square.

My first stop was Bowling Green, the oldest park in New York City, dating to 1733, where you can gaze upon the pink-roofed U.S. Bankruptcy Court. 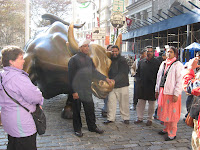 A few steps away was the iconic bronze sculpture of a charging bull that's become a symbol of Wall Street - and always seems to have a steady stream of tourists waiting for a friend or family member to snap a picture.

I was under the impression that the bull had been a Wall Street fixture for ages, maybe put there by a stock exchange or one of the big brokerage houses.

But in doing a (very) little research, I found out that it was actually a gift from a sculptor named Arturo DiModica, who created it in his studio over two years and then one night in December 1989, surreptitiously loaded the 7,000-pound sculpture on a flatbed truck and deposited it in front of the New York Stock Exchange as a Yuletide gift symbolizing the "strength and power of the American people.'' The statue was later moved to its present location in Bowling Green. 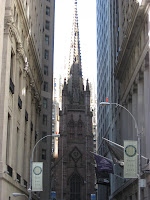 At the intersection of Broadway and Wall Street is Trinity Church, completed in 1846. I recognized the church, and the subway station in front of it, from the Nicholas Cage movie National Treasure. There was a service going on inside, so I settled for a peek through the door and a walk around the grounds. If you go down Wall Street and turn around, you'll get a nice view of the neo-Gothic spire. 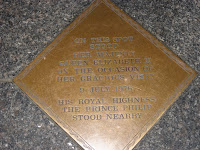 Queen Elizabeth II visited Trinity Church, an event commemorated by a plaque in the entryway: "On this spot stood her majesty Queen Elizabeth II on the occasion of her gracious visit, 9 July 1976. His Royal Highness Prince Philip stood nearby." Good to know he was close at hand! 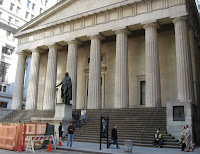 Walking down Wall Street, I stopped outside Federal Hall. The current building, the first U.S. Customs House, dates to 1842. But a previous structure on the site was where the first Congress met and where George Washington took the oath of office as our first president, on April 30, 1789.

Unfortunately, it was Veteran's Day, so Federal Hall was closed. I'll definitely have to come back on another trip and take a look inside. I also want to visit the Museum of American Finance. 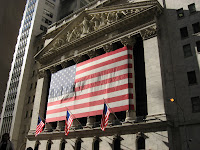 Across the way from Federal Hall is the neo-Classical New York Stock Exchange, completed in 1803. You can't get close - there are barricades and security guards in front of the building. But it looks very stately and imposing, especially with the giant U.S. flag across the front.

One thing I didn't realize is that the lower end of Broadway, in the middle of the financial district, has been turned into giant and very crowded pedestrian mall, filled with a tantalizing array of vendors selling food and the ubiquitous Pashmina scarves. 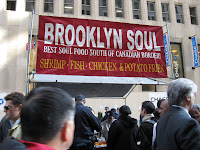 Somehow I expected I'd be dodging men and women scurrying around in tailored suits, briefcases in hand and cell phones to their ears, buying and selling stocks and bonds. Instead, there were lots of tourists taking in the smell of various grilled meats, fish and poultry. It definitely lends a festive atmosphere to the area. 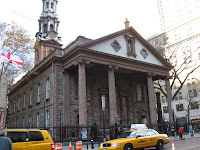 A very memorable stop on my tour was St. Paul's Chapel, a beautiful, historic little church dating from 1766 that has taken on new importance since the terror attacks of Sept. 11, 2001. It's a bit off the normal tourist track but I highly recommend a visit. (It's also a nice place to sit down for awhile and take a bathroom break.) 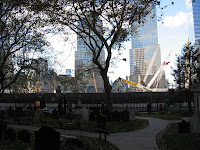 The chapel's exhibits relating to Sept. 11 are incredibly moving. They detail St. Paul's role as a place of rest for recovery workers at ground zero after the attacks, and as a site for memorials to the victims.

The chapel is located across from what was the World Trade Center - if you walk out the back, you can see ground zero from the churchyard. After the collapse of the twin towers, St. Paul's became a place of rest, refuge and memory. You can see pictures and other mementos that friends and loved ones left on the fence outside the church in the days after the attacks. 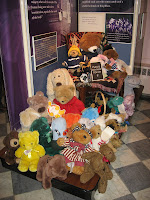 But what really got to me was a display of teddy bears that were placed for comfort by the cots of weary recovery workers, who came to the chapel for a meal and a few hours of rest in between their shifts.

Even without the Sept. 11 connection, St. Paul's Chapel would still be an historic, interesting place to visit. It's Manhattan's oldest public building in continuous use. George Washington and members of Congress worshiped there on Inauguration Day, and you can see Washington's pew.

After St. Paul's, I continued toward Chinatown, walking past Foley Square, home of the state Supreme Court and the U.S. Court of Appeals for the Southern District of New York - what Sarah dubs the Law and Order portion of the tour. Again, because it was a federal holiday, it was kind of quiet.

But things definitely picked up once I got to Chinatown - more pedestrians, more traffic, more interesting stores selling fresh fish and products whose names I couldn't read. The sights, the sounds, the smells were familiar and unfamiliar at the same time. 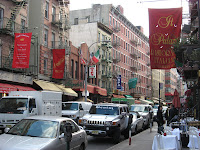 Then all of a sudden, the Chinese letters on the storefronts disappear, replaced by Italian flags flying from light poles and you're in Little Italy.

What amazed me was how quickly things change - one minute you're in Asia and the next minute, in Europe. What a city! I walked down Mulberry Street and stopped at Ferrara's bakery for a delicious pastry to keep up my strength.

My final stop was the Lower East Side Tenement Museum. Last year, I visited Ellis Island, which I definitely recommend for anyone interested in American history. I wanted to see where the immigrants lived once they passed through there, so the Tenement Museum seemed like the next logical step.

The museum tells the story of some of the nearly 7,000 immigrants - Jews, Italians, Irish - who lived in a tenement at 97 Orchard St. from the 1860s through the 1930s. What struck me was how dark and cramped and grim these apartments were, especially in the 19th century. This picture makes it look a lot brighter than it actually was inside. 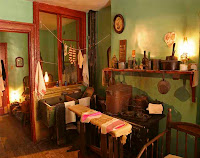 There's been a great deal of research into the lives of the people who lived in this building, and you can take several tours that cover families from different eras and backgrounds.

And the fact that I found most fascinating, considering the current political climate regarding immigration, is that the father in the Baldizzi family arrived in this country as an illegal immigrant. He traveled from Italy to Canada, and then crossed illegally into the United States. But the difference from today is, it didn't seem to matter. Our guide told us that he was able to immediately start the process of becoming an American citizen.

So, it was a great day for a walk - and it pretty much took me all day, including a break for lunch and the Tenement Museum tour. I left my hotel around 11 a.m. and returned at about 5 p.m., and I feel like I just skimmed the surface of everything there was to see.
Posted by Esther at 11:24 PM

A lovely travelogue Esther, it's just a city of endless fascination really. I had a good laugh at Prince Philip standing nearby, was that in case a lightning bolt came down I wonder?

Wow, this was so fun to read! I've been to about half of those areas, so it was fun to follow along with your experiences. I haven't yet gone to Trinity and that's definitely on the list for my trip in a few weeks. There's a painting exhibit in the basement I have to visit. I'll make sure not to go on Sunday.

Oh I loved reading this! You make NYC come alive.

Thanks, Dale! Yeah I laughed at the Prince Philip reference, too. I wondered why they even bothered to include him on the plaque. Maybe they thought he'd feel left out or generations from now, people would wonder where he'd been on that day? And you're right, New York is endlessly fascinating! There's always something new to see.

Awww, thanks so much Amanda. You're very kind. I love reading other people's travel stories, so I hope you'll write something about your upcoming trip to New York. You'll have a great time! And I definitely recommend a visit to St. Paul's Chapel, too.