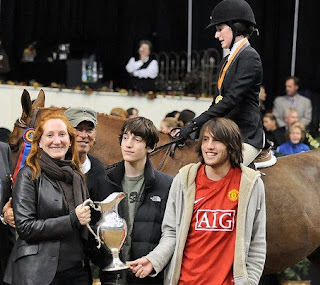 My fellow Bruce Springsteen fans, I did a double-take when I saw this photograph.

Doesn't Evan, at right, (with his mom, Patti Scialfa, dad, brother Sam and sister Jessica) look exactly like his famous father? I couldn't find the old picture of Bruce in his younger days that this one reminds me of, but the resemblance is pretty incredible.

The picture, by Gary Walts, is from the Syracuse Post-Standard. Jessica Springsteen competed in this weekend's Syracuse Invitational Sporthorse Tournament and she'll be taking several prizes back home to New Jersey, including the Maclay ASPCA Horsemanship Award. So congratulations, Jessica! It's great to see the whole family there supporting you.

I'm not sure why Evan is wearing an AIG T-shirt, but I don't think he's making a statement on the financial crisis. In the comments section, someone mentioned that the company is a sponsor of England's Manchester United football team.
Posted by Esther at 9:13 AM