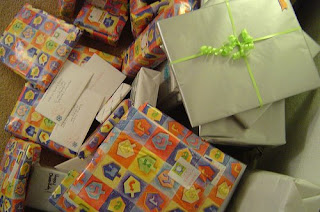 Okay, Jan at Broadway & Me is my inspiration for this. She wrote about 12 terrific gifts - one for each day of Christmas - that you can get for the theatre lover on your shopping list. So I tried to come up with my own list of 8 presents, one for each night of Chanukah, which begins Dec. 21. But really, the items on both of our lists would be great to give and receive for any holiday. I took most of the prices from Amazon, just to give you some idea of the cost involved.

1.) Broadway: The American Musical. If I could pick just one gift, it would be this 6-hour documentary tracing the history of musical theatre that aired on PBS in 2004. I watched it before making my first trip to Broadway, and it got me even more excited. I even bought the companion 5-cd box set. Plus, there are hours of extra interviews on the dvds that didn't make it into the documentary. Since it's been out for a few years, I'm assuming most people reading this already have a copy. But there are new musical theatre fans being born every minute and they'll be needing one of their very own. Cost: dvd, 59.99; cd box set, $53.99.

2.) A Raisin in the Sun. 2009 marks the 50th anniversary of the original Broadway production of Lorraine Hansberry's play about the struggles and aspirations of an African-American family. A copy of the play would make a nice gift, along with a dvd of the recent Broadway revival starring Sean Combs, Phylicia Rashad and Audra MacDonald that was filmed for television. Several theatre companies (and probably more) are putting on A Raisin in the Sun during its anniversary year. So if you live near one of them, consider buying a pair of tickets for that special someone. Cost: book, $6.95; dvd, $15.49.

3.) Carols for a Cure, Vol. 10. Whenever I'm at a show and there's an appeal for donations to Broadway Cares/Equity Fights AIDS, I always drop some money in the fundraising bucket. While I've never bought anything at their online store, this year is different. I have my eye on the 10th anniversary Carols for a Cure CD. Every year, the casts of Broadway and off-Broadway shows record holiday songs, and this year's two-disc set includes classic tracks from past volumes. I can't wait to hear the cast of Hairspray sing "Dreidel, Dreidel, Dreidel!" Cost: $20.

4.) Broadway Nights and The Q Guide to Broadway. These books by Seth Rudetsky are quick, very fun reads. I bought Broadway Nights, his novel, in the spring. It's about the life and loves of a pit musician who gets his big break when he's hired to be the musical director for a new show. So you get a bird's-eye view of how a Broadway musical comes together. I picked up the Q Guide during my trip to New York last month. It's filled with useful information, like the Top 10 Broadway CDs you must have, and the difference between an understudy, a standby and a swing. There's also some (discreet) backstage gossip. Cost: Broadway Nights, $10.85; The Q Guide to Broadway, $11.86.

5.) Long Day's Journey Into Night What makes the short-lived 1986 Broadway revival of Eugene O'Neill's classic play different from all others? It's got Kevin Spacey as the ne'e-do-well, alcoholic Jamie Tyrone, of course! And Jack Lemmon, Bethel Leslie and Peter Gallagher, too. I love watching Spacey and Lemmon engage in some brutal verbal sparring as father and son. As a bonus, there are two audio interviews - one with Spacey and a second with director Jonathan Miller. Spacey's interview is great - he talks about getting started in the business, how Jack Lemmon became a mentor and the slightly devious method he used to get an audition for Long Day's Journey. Aspiring actors, take note! Cost: $22.99.

6. Home: A memoir of my early years. Julie Andrews' memoir is an an exquisitely written, wonderfully detailed look at her youth in wartime England and her career on stage in London and New York in the late 1950s and early 1960s. My favorite parts are about her experiences on Broadway, where she starred in three shows in quick succession - The Boy Friend, My Fair Lady and Camelot. The book concludes with Andrews heading to Hollywood for the filming of Mary Poppins. I hope she's working on a sequel. Cost: $17.79.

7. 13. Tickets to a Broadway musical about a Jewish teenager who moves from New York City to Indiana and wonders whether the cool kids will come to his bar mitzvah - the perfect Chanukah (or Christmas) gift. I really enjoyed this sweet, funny, exuberant show about not simply going along with the crowd just because its the popular thing to do. It's got a catchy rock 'n' roll score by Jason Robert Brown, and a very energetic and appealing all-teenage cast. While 13 is closing Jan. 4, there's still time to see it over the holidays. You can also get the cast recording and the book based on the musical (which I haven't read yet.) Cost: book, $11.67; cd, $13.99

8. Broadway magnet. I have all my ticket stubs and Playbills, I love the Broadway posters and the souvenir programs and the coffee table books. And there's nothing better than eating your cereal and milk in the morning while gazing up at a refrigerator covered with magnets from your favorite Broadway shows. (Don't ask how many I have. Too many.) The Playbill store has a great selection of magnets and other merchandise for the theatre lover on your holiday shopping list. Cost (magnets): $4 and up
Posted by Esther at 9:42 AM

See, it always takes me a moment to wrap my head around the beginning of December being the holiday season because, until next week, it's eclipsed in my mind by my impending birthday.

But, these presents look fabulous either way, I must admit.

They all sound fantastic so I'm really happy you're getting them all for me! You're too kind! :-)

Awww, thanks so much Dorian! I hope you have a merry Christmas and a very happy birthday. I could have listed lots more - like all the cast recordings I bought this year! But I tried to do a mixture of things I'd read or listened to or watched.

Oh Dale, if only I could! If you like, I can e-mail Santa the link to this page! And check out Jan's list. She's got some wonderful suggestions, too.

It's okay, I always shop extensively for myself and then everyone else gets the scraps. I think I may be getting you what I got you last year though. :-)