My experience with ballet and modern dance is very limited - when I was in college, I saw the Joffrey Ballet once and I went to The Nutcracker once. 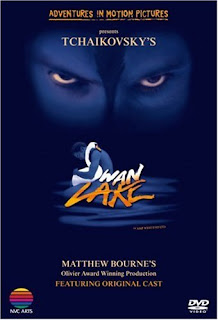 So when I rented a dvd of British choreographer Matthew Bourne's ballet Swan Lake a couple of years ago, I wasn't sure how much I'd enjoy it. I'm not an incredibly visual person - I like having my stories told through words.

Well, Bourne's version isn't traditional - the swans are played by male dancers rather than ballerinas. But the story of a young prince who years for his freedom is powerful. And what swans! Bare-chested, agile and athletic, they were simply mesmerizing. (In fact, I think I need my very own copy!)

Since then, I've seen Mary Poppins on Broadway and enjoyed Bourne's choreography. The tap-dancing chimney sweeps on the rooftops of London in "Step in Time" were especially memorable. If it was his idea to have Bert make his way up one side of the proscenium and down the other, he's a genius.

Last week, Vance at Tapeworthy and Steve On Broadway included another of Bourne's works, The Car Man, on their best of the decade lists. I was wishing I'd seen it when a thought hit me - maybe The Car Man was on dvd, too. And it was!

All I can say is - wow. It was stunning and sizzling. There were also a few scenes of horrific physical and sexual violence. This is film noir translated to ballet. Truthfully, the bloodiness made it tough to watch at times. But I found the story easier to follow than Swan Lake. 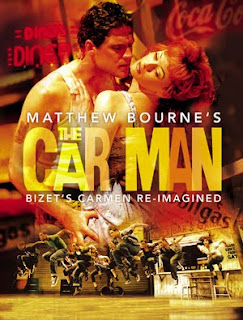 From what I've read, Bourne kept most of the music from Bizet's opera Carmen. (I recognized the most familiar part - the habanera.) But the story is an adaptation of The Postman Always Rings Twice.

A drifter shows up at diner/garage circa 1960, located in a small American town in the middle of nowhere. He gets a job as a mechanic and catches the eye of the garage owner's wife, a beautiful young woman married to an older man. Well, you can imagine that sparks fly. And the set by Lez Brotherston is terrific, too. He gets the isolation and seediness and greasiness of the place.

Alan Vincent is excellent as Luca, the drifter. He's got a mysterious quality and he doesn't have a dancer's lean body, so you're surprised at how well he moves. In an interview on the dvd, Bourne compares the character to Marlon Brando or James Dean.

I also liked Will Kemp as Angelo, the garage go-fer, a vulnerable young man who's constantly getting picked on by the older, rougher mechanics. (They'd made great gang members in West Side Story.) Saranne Curtin as Lana, the garage owner's wife, was perfectly flirtatious and sexy.

I gather that plans to mount a production of The Car Man on Broadway foundered after the September 11 attacks, which is a shame. I'd love to see it on stage. But there are advantages to watching it on dvd - you can see the expressions on the dancers' faces.

This is one of those works that really changes the way you feel about dance. It tells an absorbing story in a way that's so clear and thrilling to watch and incredibly sensual. You don't need words to know what's going on.
Posted by Esther at 12:05 AM