Some thoughts on American Idol 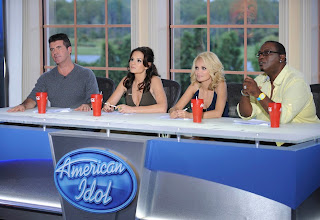 I watched American Idol last night. I'm not really a fan of the show but Kristin Chenoweth, introduced to the Idol audience as "a darling of the American musical stage," was a guest judge at the auditions in Orlando.

And I do love her!

It seemed like she was having a good time, hitting it off with fellow judge Kara DioGuardi. Sadly, Chenoweth was only on during the first part before rushing back to New York for some unexplained reason.

Maybe it had something to do with what she told People magazine: “It was harder than I thought because you really do have to look into the faces of people and say yes or no. I don’t like to be a bummer and hurt anyone’s feelings.”

Anyway, I watched the rest of the show for maybe the third time in my life. It struck me as a little sad - thousands of people waiting for their brief chance to make an impression and get on TV, hoping for fame and fortune that most likely will never come.

Far be it from me to admit that there's anything underhanded going on but I did find it interesting that three of the contestants picked by DioGuardi, Randy Jackson and Simon Cowell to advance to the next round had compelling background stories.

They were: Seth Rollins, a father struggling to raise an autistic child; Matt Lawrence, a young man who served time for a bank robbery he committed with a bb gun at age 15; and Shelby Dressel, a young woman with a nerve defect that prevents her from smiling on one side of her face.

And they were all highlighted with introductory segments, which I took as a not very subtle hint. Seriously, after that heartwarming buildup, didn't you guess that they were probably going to get the thumbs up from the judges?

It did lead me to wonder: What happens if you're a great singer but you don't have a story of triumphing over adversity?

Then there are couple of performers who are so terrible I can only imagine that they're included for comic relief for the audience of 30 million people.

A young man named Jerrod Norrell became agitated when the judges didn't like his rendition of "Amazing Grace." He had to be removed by security and a few seconds later, we saw him outside the audition room, handcuffed and on the ground.

Seriously, while his behavior was inexcusable, did he really deserve to be humiliated like that on national television? Of course, to the Idol producers it hardly matters - what drama! And for all I know, he could be thrilled at his two minutes of fame.

If the 10,000 screaming Idol hopefuls we see at the beginning of the show are the optimistic, anyone-can-make-it side of the American Dream, the poor guy on the floor in handcuffs is an example of what happens when reality comes crashing down.
Posted by Esther at 12:15 PM

There are plenty of folks who make it through to Hollywood that you never see on these early episodes of the the season.

Oh, ok. I didn't realize that. Maybe I'll tune in again after they get to Hollywood! I just wish Kristin Chenoweth had been on for the entire show.

Every now and then they do also profile someone, tell you the whole backstory and then not let them through. Idol is like slowing down to look at a car crash, I can't help myself.

Thanks for letting me know. I just assumed everyone with a heartwarming tale made it. And there are definitely some car wrecks. Maybe I'll tune in again when they start the Hollywood segment.

Yeah -- usually the heartwarming tale people are the ones who struggle the most during "Hollywood Week," in order to build some dramatic tension. They usually don't make it past Hwood week.

Thanks, Bob! I have so much to learn. Sigh.