For a week now I've been watching another kind of drama unfold via Twitter. The Kennedy Library in Boston is re-creating John F. Kennedy's race for the White House in 1960 by tweeting events from his daily schedule. 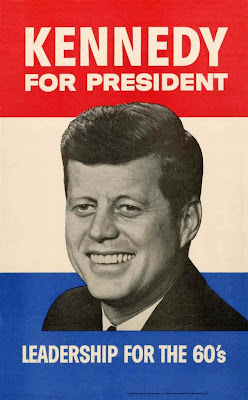 Last Saturday the Massachusetts senator announced his candidacy for president, on Jan. 2, 1960. By today's campaign standards, he was literally a Johnny-come-lately. You can watch a newsreel report here.

Kennedy's campaign-related events during that first week included an appearance on Meet the Press (still on the air!) and lunch on Madison Avenue with the editors of Look magazine (no longer published).

Interestingly, he also met with an Episcopal bishop and Methodist minister from Delaware, perhaps indicating how early in the campaign the Roman Catholic Kennedy was confronting questions about his religion.

For a 1960s buff like myself, this is all pretty interesting stuff - and such a great way to look back, in a half-dozen or so 140-character chunks per day.

There are all kinds of little social and cultural details you can pick up on, too - like the dinner Kennedy attended at the National Women's Press Club on Jan. 6, 1960. The National Press Club was still a male-only bastion. Women weren't admitted until 1971.

I'm looking forward to the first Kennedy-Nixon debate, in September. And speaking of Richard Nixon, the vice president announced his candidacy on Jan. 9, 1960. It would be great if the Nixon Library did something similar on Twitter.

The 1960 presidential campaign was a watershed - the first in which both candidates were born in the 20th century, the closest electoral vote since 1916, the first televised debate, the first election in which Alaska and Hawaii participated.